The sequel for the 1950’s B-movie classic"The Killer Shrews" is now in post production. "Return Of The Killer Shrews" stars John Schneider, James Best, Rick Hurst, and Jennifer Lyons as a reality TV crew being led into a remote jungle on a deserted island that unfortunately is home to the flesh eating mutant shrews. The film is being released by Spotlight Pictures and is one of the coolest throwbacks to the 50’s b-movie cinema experiences to come along aside from the “Chillerama” anthology. 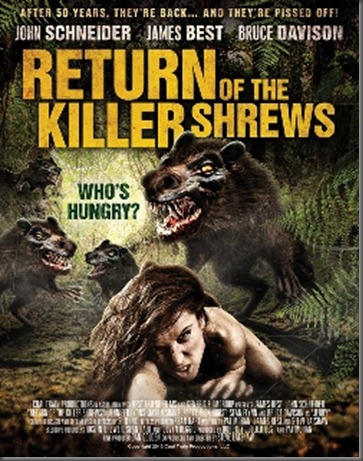 A realty TV show needs an experienced captain to take them to their remote deserted island location. They hire Captain Thorne Sherman (James Best, “Dukes of Hazzard”) who signs on before realizing the island is a place Captain Thorne has been before—The Island of the Killer Shrews! Of course, no one believes Captain Thorne and his tales of flesh-eating rodents, but they will find out the truth of the Killer Shrews soon enough.
From the beginning, the shoot is a disaster. All the supplies have not arrived, the crew is inexperienced, and the show’s legendary “animal expert,” Johnny Reno (John Schneider, “Smallville,” “Secret Life of the American Teenager,” “Dukes of Hazzard”) is a talentless know-it-all. The production manager, Sam (Jason Shane Scott, “Starship Troopers 2”) sends two crew members into the jungle to scout locations, but they never return, having been attacked and eaten by the Killer Shrews.
Captain Thorne has seen this before, having been on the island the first time the Killer Shrews struck, so he gets everyone into a safe house—the same scientific compound where the man-eating shrews were spawned half a century ago. However, no safe house can be completely “safe” from the Killer Shrews and they attack, under the leadership of Jerry (Bruce Davison, “X-Men,” “Willard”), a mysterious castaway who has a strange hold over the Killer Shrews.
Captain Thorne and Jerry have a shared past, and there will need to be one final confrontation to see which of the two enemies will survive each other, and whether anyone can survive the Killer Shrews.