Now I know that “The Medusa Touch” is not a horror movie but because of it’s dark nature this paranormal thriller is one that I wanted to check out in exploration of classic cinema. The film is about a writer played by Richard Burton who’s telekinetic abilities spark disasters. Shot in 1977 the movie was directed by Jack Gold (The Reckoning, Conflict). Also in the cast are Lino Ventura, Lee Remick, and Harry Andrews. I picked this film because of two reasons: One-I loved the title “The Medusa Touch” conjures dark ominous images of death and fear. Two- The subject of telekinesis. I am prone to watch anything, no matter how dated, if it has some paranormal element to the plot line.


From the beginning the story keeps the intent of the plot hidden. The movie shows pieces of the mystery surrounding Burton’s character John Morlor from the point of view of the people who new him best in those last days leading up to his brutal beating in his own apartment. These details unfold in flashback sequences. “The Medusa Touch” is reminiscent of classic British murder mystery theater most notably Sherlock Holmes. Our only discoveries come through the vigilance of the investigator who is working the case after Morlor has his head bashed in while watching a NASA tragedy unfold on the television. These types of stories require patience and an appreciation for dialogue as most British films do. 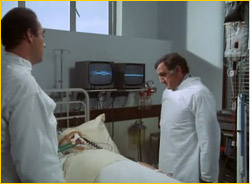 The best parts of this movie come from Richard Burton himself whose character starts out more like a serial killer in the making venturing into demonically possessed child rivaling Damien Thorn. His dark and disconnected presence brings an eeriness to the film which is the only supernatural draw to the movie’s ambience. There are plenty paranormal and theological references that elude to evil and the true nature of Burton’s character coupled with several scenes of his willingness to kill those who offend his twisted morality. There is an air to “The Medusa Touch” that is much like watching classic Hammer films like Scream and Scream Again and the MGM movie House of Usher. The story moves in a subdued manner with limited action which forces the slow build of the suspense. This movie is not action driven but the paranormal matter laden plot flows evenly and easily through the movie. “The Medusa Touch” is not one that you would run out and get so it can set in your classic movies collection unless you’re a big Richard Burton fan or you are fanatical about Jack Gold’s work. However the movie warrants acknowledgement for it’s ability to hold attention when addressing the arguments of mental paranormal abilities such as telekinesis and telepathy versus man’s understanding of the brain through science. To watch this film at least once is to have a greater appreciation of the paranormal/supernatural genre’s heritage.