Scott Tepperman is best known for his part on the SyFy show “Ghost Hunters International” as a key member of the paranormal research team out to document the supernatural entities that haunt some of the worlds most notable locations. He is also a published author, film actor and now a screenplay writer and soon to be director. He announced his directorial debut with the teaser poster and a Facebook launch  of his original project “I Scream”.  Production on this film is scheduled to begin in the spring of 2013 with the pre-production and filming to start in the summer as he aims to be ready for a winter 2013 release date.
Here is how Scott describes the film: 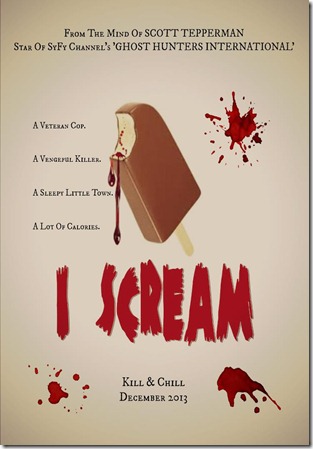 “Those glorious 1980s horror-comedies are back with 'I SCREAM', the upcoming directorial debut from Scott Tepperman (Syfy Channel's 'GHOST HUNTERS INTERNATIONAL'). Paying homage to cult horror filmmakers like Frank Henenlotter ('BASKET CASE'), Larry Cohen ('IT'S ALIVE!') and Lloyd Kaufman ('THE TOXIC AVENGER'), 'I SCREAM' walks (and crosses) the often blurred line of comedy and camp - and of tastefulness - while managing to craft its own entertaining story that you'll just have to see to believe!”
Posted by A Southern Horror Fan