Check Out The Teaser Trailer For Irish Thriller “Burial At Thornhill” 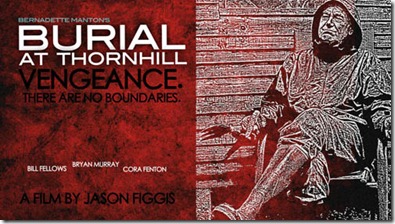 “Burial At Thornhill” looks to be a dark and haunting character study that focuses on a couples emotional turmoil while dealing with the kidnapping and murder of their daughter. The psychological nightmare is directed by Jason Figgis and stars Cora Fenton, Bryan Murray, Bill Fellows and looks to twist and gnaw at our emotions with it’s disturbing storyline. I am so interested. Check out the avante garde teaser trailer for the film below.

John (Bryan Murray – Holby City, Casualty, Brookside) and Jane (Cora Fenton – Strength and Honor) are a happily married couple living in Dublin’s sprawling suburbia – until the afternoon their daughter is abducted and murdered. While John quiets his grief in daily routine; Jane has no such recourse to normality and so sinks ever further into torturous insanity. In Jane’s mind, someone needs to pay and pay they will. Peter (Bill Fellows – The Tournament, United, Romans 12:20) is a North of England Architect living in Dublin while overseeing a six month contract. He is soon about to take centre stage in Jane’s terrible fantasies of Vengeance and where Vengeance is concerned; in the mind of the insane…there are no boundaries.