Check Out Both Trailers For “Kill Me Now” 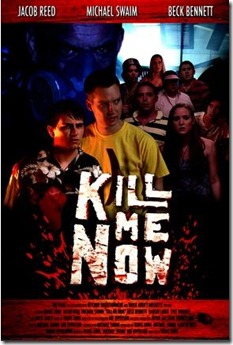 Kill Me Now chronicles one unforgettable night in the lives of a ragtag group of small-town teens. It's a night that will prove equally unforgettable for the sinister Driller Killer (Brett Fancy), a deranged serial killer bent on ridding the world of vapidity and dipshittedness (Everyone Else). When he comes upon the kids' all-night graduation party--conveniently held at a cabin deep in the woods--he finds both in spades. Unfortunately, Mr. Killer is about to learn something crappy bumper stickers learned long ago: stupid people can be deadly in large numbers. Kill Me Now blends horror, comedy, depth and plain jackassery to form a brew so potent you won't know whether to laugh, scream, or think about, like, life and stuff. The movie features performances from a staggering array of the Internet's hottest up-and-coming comedians, writing from the guys behind Those Aren't Muskets! and Cracked.com, direction from a dude whose previous work includes hardcore, joint-smokin', Twista-havin', Kanye-featurin' rap videos, and at least one scene where a chick totally gets a drill to the brain. But it's funny!