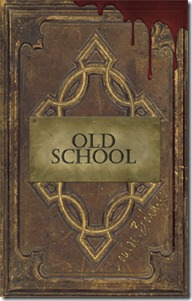 Old School Anthology comes from Belfire Press and is edited by Louise Bohmer with an introduction by Bob Freeman. Old School, a traditional horror collection born of seven twisted minds, invites you back to a time when vampires and werewolves were monsters who made humans quiver in terror.
Fourteen short tales offered by David Dunwoody, Jackie Gamber, R. Scott McCoy,Natalie L. Sin, Horace James, Gregory L. Hall, and Louise Bohmer, all tied together by selected poems from Zombie Zak – Old School reminds one of terrors best not forgotten.
Within these pages, evil children terrorize, witches gather the teeth of the young, cosmic blobs eat the world, while creepy crawlies ruin a man’s life and a headless ghost seeks revenge. Wander down this spooky path with poems and stories that revive our nightmares about golems, harpies, and other forgotten creatures.
check it out here!

read excerpt:
from David Dunwoody’s ‘The Missionary’
In the glow of the radio display, Johnny’s face took on a garish pallor. He had to be older than he’d said. Pushing forty, likely. She didn’t blame him for fudging the numbers a little–after all, she’d told him she was barely thirty, another lie–but out here in the dead of night, the excitement of flirting with a man she barely knew had given way to an uneasiness that had her stomach in knots.
“Johnny, please.”
“Suzun.” He cupped her shoulder and tried to draw her closer. She stiffened and looked away, long black strands falling over her face.
“It’s been a nice night,” she said quietly. “I’d hate to ruin it.”
“How is this ruining it?” He shifted towards her. Looking up, she saw the sweat stains under his arms, the juvenile desperation in his eyes. A far cry from the gentleman she’d met at the dog park. All of that, a deception–she’d been wrong again. She’d taken a chance, swallowed her uncertainty and reached out to a stranger, knowing he’d never otherwise take interest in the mousy Korean girl with the black Lab. There was just nothing here for her in this town, was there?
“I mean it,” she said, but he was no longer listening, and moved in to nuzzle her neck. His left hand stole into her skirt.
“Johnny!” She shoved him back and, without thinking, slapped him hard across the face. His skin flushed. His jaw tightened. “What the fuck—”
The night sky lit up, a brilliant orange light filling the car–and a split-second later, Johnny’s cry was dwarfed by the roar of a fiery missile streaking over the Chevy and down into the ravine. The trees parted and flew into the air like paper. Flames rose in a geyser from the point of thunderous impact.
Johnny was screaming, clawing at the steering wheel, jamming his foot on the accelerator despite the engine being off. Sue just stared into the ravine as the orange glow softened to a pulsing red, and as fire quietly climbed the trees bowing in the missile’s wake. No, not a missile… a meteor. Meteorite, rather. She remembered that from high school science. And she was already getting out of the car, all her fear gone, both of the meteorite’s cacophonous arrival and the gibbering man-boy in the driver’s seat.
She started carefully down the steep slope, gripping clusters of plants as she dug her heels into the earth.
“Hey!” Johnny shouted. She heard his door slam, and then he was crashing after her. “Wait! What are you doing?”
“I want to see!” she called back. She could glimpse the glowing crater clearly, what with the trees lying nearly horizontal around it; had to be twenty feet in diameter. Couldn’t tell how deep it was. That warm red glow defied definition. It was probably emanating from more fire down in the crater’s pit, but the light wasn’t just flickering. It was gentle, rhythmic… like a heartbeat.
Johnny seized her arm. “Are you out of your mind? The whole ravine’s going to go up in flames!”
“I just want to see.” Sue was transfixed by the light.
Johnny pulled her roughly back. “Sue, we’ve got to go!” He patted the pockets of his jeans and muttered, “Phone’s in my jacket. C’mon Sue. Please.”
The crackling of burning wood reached her ears. Smoke rose in plumes from around the crater–not from the crater itself, only the trees. There was something in there, she knew, something alive. But the fire was spreading now, and if she continued down into the ravine she’d likely find herself trapped.
“All right.” She turned, shaking off Johnny’s hand, and started back up the incline. At least the evening had ended on an interesting note.
Behind her, Johnny shrieked.
Sue turned, nearly losing her footing, arms flying out to grab handfuls of tall grass. Backlit by the growing fire, Johnny was a mere silhouette, but there was something around his leg, something emitting a pulsing red-orange hue–a tentacle of sorts that expanded both upward and downward to cover Johnny’s thigh and his foot. He was beating at the thing, and in its light Sue could now make out his face. It was contorted in agony. Every time he struck at the mass on his leg he howled. His fists were raw and bloody. The mass crawled up his waist, and blood spread through the material of his shirt. What is it doing to him?
Seconds later, there was no doubt. Seconds later, when he retched violently and folded over, spitting up blood-tinged bile, his body was scissored in half at the belly, torso falling into the grass while the pulsing red-orange mass closed over its gory prize and… consumed it.
The thing had doubled in size since it grabbed hold of him. It spread greedily over Johnny’s torso in an instant.
Sue coughed, smoke pouring into her lungs. The flames had crawled past the scene of Johnny’s gruesome death and were within feet of her. Her eyes were stinging and pinched shut, refusing to open. She turned blindly to run. Her foot slipped. She tumbled back into searing heat.