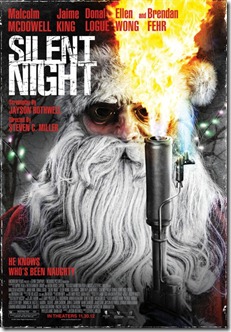 “Silent Night” comes out on DVD on Dec. 4th after a limited run in select theatres starting Friday. The film is a re-imagining of sorts based on the cult classic flick “Silent Night, Deadly Night”. It is directed by Steven C. Miller and stars cult stars Malcolm McDowell, Jaime King, Donal Logue, Lisa Marie, Brendan Fehr and Ellen Wong. Check out the newest clip as well as a short featurette behind-the scene’s clip below.

McDowell and King star as a small-town sheriff and deputy on the hunt for a murderous Santa Claus terrorizing their community on Christmas Eve. But with the streets full of Santas for the annual Christmas parade, the killer is hiding in plain sight. He’s made his list, checked it twice, and the naughty are going to pay with their lives.