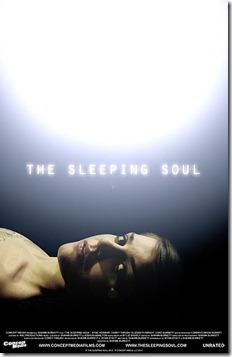 Shawn Burkett’s “The Sleeping Soul” unravels the life of a young woman struck by tragic misfortunes only to battle greater strife as she deals with remorse and healing of deep emotional scars as the sole survivor of a fatal accident. However things are not always how they appear and life becomes plagued with a dark reality that consumes young Grace James. The short film stars  Ayse Howard, Jarrod Rowe, Corey Thrush, and Elicia Copenhaver. it is a strong psychological character study of grief, and powerful need for healing after tragic events. The story is one written by Shawn Burkett and adapted for the screen by Shawn along with Ryan Stacy.

“The Sleeping Soul” is an emotional journey into the dark depths of the human psyche. Displayed in an Impressionist artist style that pulls the viewer into the world of this tragic tale of loss and recovery from one of the purest most fragile regions of the human condition. A personal journey into the sudden deaths of those closest to you. It is an intense and moving film that captivates with it’s eerie soundtrack while unleashing aggressive moments of suspense  that pull you in further into the heartache and anguish of the main character. There are truly moments when this psychological play unleashes truly suspenseful bursts of melodrama that lulls you into the path of some truly intense scenes. I found myself fearful of miss James’ personal safety which is exactly what a director wants from the audience.

The over all drama and intensity of this film is strong enough to hold you for the entire journey while entertaining in a deep psychological way that creates a connection between the viewer and the character on screen. It is a passionate story that emotes a sorrowful respect for human tragedy told artistically while maintaining a New Wave since of direction that allows it be fresh and modern. I felt both compassion and concern for Grace James as portrayed by Ayse Howard. This is an intense emotional foray into the darkest realm of human tragedy. If you haven’t seen this film yet I suggest that you check it out. The film was chosen as an official selection for Fright Fest 2012 and gained a lot of praise from the Indie film community.