Check Out The Trailer For British Thriller “Tower Block” 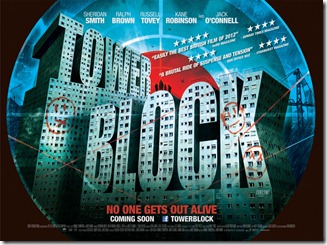 Currently only showing a date of releaser for U.K and Ireland director’s James Nunn and Ronnie Thompson’s “Tower Block” looks to be one hell of a ride. The action thriller comes out September 21st and stars Sheridan Smith, Jack O’Connell, Russell Tovey, Kano and Ralph Brown. Check out the trailer below.

A year after witnessing a murder, residents of Tower Block 31 find themselves being picked off by a sniper, pitting those lucky enough to be alive into a battle for survival.
One tower block. Fifteen tenants. One sniper. Someone is picking off the last remaining occupants of a tower block, using a high powered, silenced rifle. Nobody else has heard the shots, and no help is coming. If the terrified victims can't figure out how to escape, they're all going to be killed, one by one.