Check Out The New Hilarious Horrors Coming To Main Street


Check out the teaser poster for “Monsters On Main Street”. A horror comedy in the mold of Shaun of the Dead meets Friday the 13th lines up for production this October. From writer, producer and director Brad Leo Lyon, the creator of ‘Little Creeps’, comes the new horror comedy ‘Monsters On Main Street’, starring horror icon Robert Z’Dar, two time Grammy nominee and American Comedy Award winner Judy Tenuta, and more.

In a small town suffering from the news of its first ever serial slasher, local high school athletic director Lance Dawson decides to get his down on his lucky buddy Paul Blake a job coaching girls basketball. But when the fact that Paul's never coached, let alone played, basketball could cost both of them their jobs, they seek out Daniel Buckworth, the town's local psychic, for help. Bu
ckworth's plan to summon spirits to help the girls win games fails when instead of just communicating with them, they accidentally awaken them in the form of zombies. Main Street has seen its better days as it gets ready for a three way battle royal between the slasher, zombies, and a group of friends who may be this small town's only hope for survival. 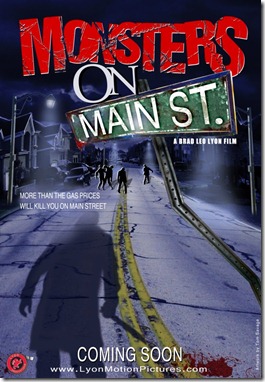