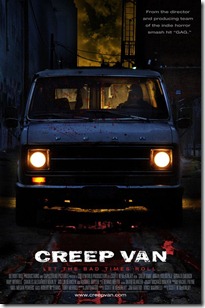 “Creep Van” is a dark and twisted story that pits a guy trying to get his life back on track against a psychotic killer stalking him in a super modified creepy van. The film is directed by Scott. W. McKinlay and stars Brian Kolodziej, Amy Wehrell and Collin Bernsen. The story has Kolodziej playing a guy who moves in with his best friend after a harsh break up. He needs wheels and luckily for him there is an awesomely vintage “bad man” set roaming the neighborhood looking  for buyers. Unfortunately it is just a mere lure to get potential victime, I mean buyers close enough to seal the real deal. This is the guy all our parents warned us about growing up!
For me the film comes off a little more tongue-in-cheek corny than I would have liked to see with a film that is this bold and original. The acting is just a big cheesy which gives a strong comedic vibe but not so much that it sucks. You just get a too obvious since that everyone around this project knows how B-movie this thing is which takes away from the darkness too much. It really is a horror comedy minus tack sound effects. For me that is the only thing that doesn’t quite fit with this film. “Creep Van” has some awesome and gory kill scenes and when it comes to psychos “The Creep” in this movie is as brutal and unrelenting as any. It is the saving grace of the whole film.
This movie is an obvious homage to early 80’s films that blend “Madman” like atmosphere and horror with the truly twisted humor of “Maniac Cop”. I wouldn’t say that this movie is “scary as hell” but it is an enjoyable film that brings the blood. There is enough going right for “Creep Van” to warrant seeing. This is something that is against a lot of reviews I have seen online about the film that consider the movie crap. Yeah there are some crappy things happening here but taken on it’s entirety this film manages to entertain and ride that cult classic gory feel from start to end.
Posted by A Southern Horror Fan