My Review Of “Midsummer Nightmares” 2011

“Midsummer Nightmare” is a modern horror film that embraces the classic Slasher genre from beginning to end. The film is directed by Ryan Stacy and produced by Shawn Burkett the director of “The Sleeping Soul”. It unleashes a gore rich reality of mayhem as a group of friends set out to have their annual Halloween in July party. Some people do Christmas in July but this close and tumultuous collection of friends celebrate a truly festive nightmare event. It is brilliant and I hope to godz more people really do have these Halloween in July parents, if not they should! The film stars Chad Collard, Amanda Collins, Stacy Freeders, Scott Gillespie, Kelci C. Magel,  Jessica Mayes, Julie Sherwood, Karen Stacy, Cory A. Thrush, and Joe Vollman. 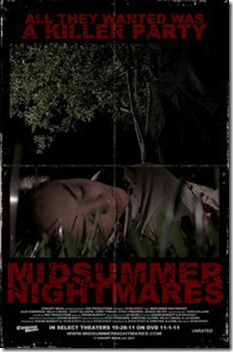 “Midsummer Nightmare” is a straight up slasher flick that delivers the blood splatter and body count. There is even a nod to Argento in the classic style of a truly emotional ramped up psychotic killer who’s identity is almost obvious but with enough question added to the story to make you wonder just who the killer really is. There is enough melodramatic banter between this cast of characters that portrays them more as “frienemies” and rivals any reality show drama. The soundtrack is a classic eerie, almost unnerving pitch that carries you along this horror laden ride that is an homage to the classic films of the 80’s, while allowing for a more modern crescendo into a nightmare finish that in no way seems copy-cat. The story is modern and maintains originality as it delivers it’s classic death blows anchored by dark suspenseful moments that are just as uneasy as the kill scenes.

This film is a cool Indie ride into horror that is entertaining to watch unfold. There are small moments the the dialog seems to drag the films intensity down but that just only makes you welcome the truly full throttle death that you know is coming. Actually a lot of the characters personalities are abrasive so you almost want to see them die. If it is just me that felt that way then I off handedly apologize and promise to seek therapy in the near future! I am not gonna give away in spoilers in this film but let me just say there is screams, psychotic banter, bitches, partying, sex and murder so just as any traditional horror flick entertains on this level, so shall “Midsummer Nightmares”.