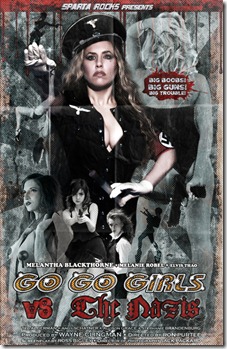 Back in March I posted a story about “Go Go Girls VS Nazis” an exploitation-ish film that has the sexy divas of dance fighting the most monstrous human form ever created – Nazis! Now directors Patrick Beck and Jack Packard have released a teaser trailer for a film that is sure to a fun genre film to say the least. It is a total tribute to Russ Meyer the man who gave us “Faster Pussycat Kill!, Kill!” and “Vixen”.

In a Small town near Lake Michigan a group of Nazis are slowing taking over. Can the Go Go Girls save the City? Will Tommy ever look at Barb's eyes?