My Review Of “An American Werewolf In London” 1981 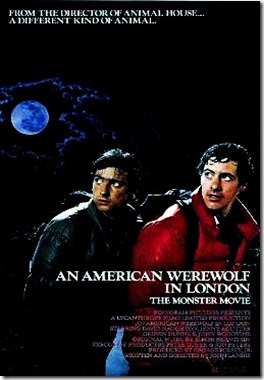 Some movies just raise feelings of excitement and pleasure inside no matter how many times you watch the film. “An American Werewolf In London” is one of those films that no matter how many times I watch I get giddy inside as I watch that opening scene of David and Jack walking down that county road near Yorkshire Moors. Directed by John Landis this film was released as a horror/comedy in 1981. The story follows two American backpackers in England. One is devoured by a wolf and the other is only bit before villagers shoot the beast. Madness and chaos transform the survivors life as he deals with the tragedy in London Hospital. A great set up for “fish out of water” story with a macabre point of view.

The film has some very stereotypical aspects to it, the almost arrogant and foolish way that British intelligence is shown almost seems derogatory, as David must submit to foreign policies and beaurocracy. However the images of Londoners is mildly balanced and justified by the asinine shenanigans of David Kessler. The story is a funny and the negatives are minor unless you’ve seen the film like a thousand times and those idiosyncrasies are all that remain to pick at. The story stays with in a classic premise that does not rely on props or gimmicks of the time to find it’s humor which make it an easy film to watch no matter how many decades pass.

The special effects in this film are kick ass and organic. It is some of the best special effects make up work of the era. The film did not rely on cartoonish transpositions or tacky CGI which was all that was available in the 1980’s. It kept with the basic concepts and abilities of creature effects , something that I am glad to see come back into fashion in horror. There are a few scenes in this film that really stand out as far as the FX is concerned. The scene with the Nazi Werewolves slaughtering David’s family in his dream sequence is awesome and gives way to a story in the werewolf genre that I personally love. Then there is the scene when David is in the theater with all the dead whom he is responsible for. The rotting visuals are kick ass. Gross and gory and good. Plus I think this is the first time that we saw werewolves as massive beasts instead of the upright biped creature known in earlier stuff like “The Wolfman”. No need for a real wolf, the kind popular in todays shows and movies, nor is there any aspects of the standing monstrosity that is so terrifying such as in “The Howling”. This was a truly original design for the era. It made not only werewolves scary as hell beasts with almost no resemblance to man but it also made real wolves a bit more scary as well (for me anyway).
Now as far as the over all effect of this film. I still find it as watchable today as I did the first time I saw it on HBO.

As I said many a time in the past- my mom refused me theatrical horror films and regulated the television stuff until I was at least 11 years old. So I had to sneak or beg a sitter to let me watch something on HBO. “An American Werewolf In London” was something I plotted to see. I knew when it aired on a Saturday, and I knew which babysitter to favor that weekend so that I would be able to watch. It worked and I was both fascinated and scared from the first wolf attack until the final scene of David being shot in the alley. The humor, effects (especially the transformation scene) and the setting of this movie make it a true classic, American or otherwise.
Posted by A Southern Horror Fan