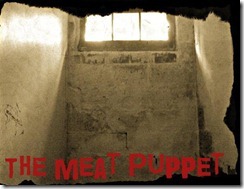 A “meat puppet” is persons that have no will of their own; somebody that lets others control them. A slave to others beliefs and commands, has no soul and is therefore controlled by others). “The Meat Puppet” is a horror film that promises to break fear back to horror story telling. An indie film that is currently filming in New Jersey this indie horror project is from the mind of Award Winning Actor Keith Collins. He along with Silver Phoenix Entertainment, Valenti Vision Films have teamed with NY Emmy Award Winning writer Joseph Pepitone and Billy Pepitone to bring this bone chilling film and sadistic thrill ride to horror, (giving a much needed return to the meaning of “horror films”). Said about this film,  “sure to give movie goers the fright of their lives” which is something a lot say but few live up to. I am sure this film will be one of the few that deliver on the promise. The film stars Keith Collins, Greg Valentino, Brandon Ruckdashel, Gary Garver, Billy Garcia, Ron Thal, Jason Prager, Billy Sample, Jamie Reed-Kovac, April Hunter, Erik Chopin, Theresa Galeani, Doug Bollinger, Faith Stanek and Geri Reischl.

Synopsis:
A vain, successful playboy tortures and kills beautiful girls and uses them to make the perfect meal for his lavish dinner parties. Body parts, blood, torture, cannibalism and NO escape are a few ways to describe this clever new terrifying and psychologically damaging creep show.

“ “The Meat Puppet” tells the story of Andrew “Drew” Shelton who has it all – looks, money, women and an insatiable taste for human flesh. His vanity is only surpassed by his obsession with finding the perfect tasting meal and it has fueled his appetite for killing, preparing and cooking beautiful women. He throws lavish dinner parties and serves his guests his latest victim and one unlucky guest becomes the main course of his next get together. When a no-nonsense detective starts putting the pieces together, it leads to a game of cat and mouse that only increases the stakes. But is Drew the soul-less, cold-blooded killer that he appears to be? Or is he just the Meat Puppet for a more sadistic mind?”