My Review Of "Out Of The Dark" 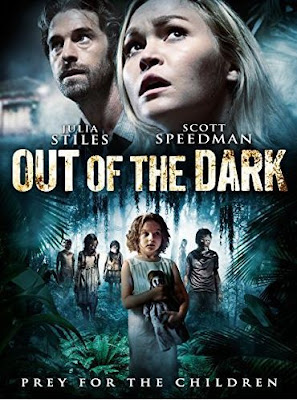 "Out Of The Dark" is a supernatural thriller with a strong 'global responsibility' message with the subtext. The film is directed by Lluiz Quilez and stars  Frank Cuervo, Pixie Davies, Alejandro Furth, Stephen Rea, Scott Speedman and Julia Stiles. The story takes on themes of corporate exploitation over ingenious cultures for profit hidden in a very dark, emotional paranormal thriller.

Synopsis: A young family moves to South America as the wife takes over her father's manufacturing plant in the area. They soon find themselves haunted by the ghosts of young children, leading them to a dark history and sinister behavior on the part of an American company.

The story is one that has been seen before in similar films to "Out Of The Dark" with a family moving to a new place but unfortunately pick one cursed by a tragic past, and lingering paranormal influence. Quilez's story is a good one though, framing this construct in a beautiful, subtropical location, disturbing historical area steeped in superstition and legend. Plus he gives us a clear message of cruelties brought about by foreign companies exploitation of almost "third world"  regions for profit, all wrapped nicely in a chilling supernatural thriller with some vengeful spirits.

"Out Of The Dark" does have some pretty cool make-up artistry and special effects. It is a mix of semi-gory practical design and expected CGI ghost-y stuff. Although instead of feeling redundant, the CGI in "Out Of The Dark" is creative and at times beautiful in its cinematography. The atmosphere is a blend of warming with the family taking in the beauty of their new home, and the darker, chilling aspects of past tragedy, a cursed people, and a family hunted by angry spirits. The soundtrack is equally intense and eerie. Plus there are moments when the quick shock gimmicks actually scared me a bit.

Overall "Out Of The Dark" is a nicely produced, creative thriller with a lot of suspense and drama. The cast give acceptable performances and the characters are developed nicely, the native Colombians more so than the family. The ghost children are haunting and creepy. On the down side though it becomes too clear too early in the story as to the true nature of "Out Of The Dark" so some of the thrill and suspense does get lost during the final 3rd of the film. The ending feels a bit drawn out and unnecessary at the very end, not in the actually story aspects but more the visual-conceptual stuff used at the end. It could have used less theatrics and been more effective. Anyway "Out Of The Dark" is a cool, entertaining story with a more mature narrative that shows some real heart.
Posted by A Southern Horror Fan