My Review Of "A Haunting At Preston Castle" 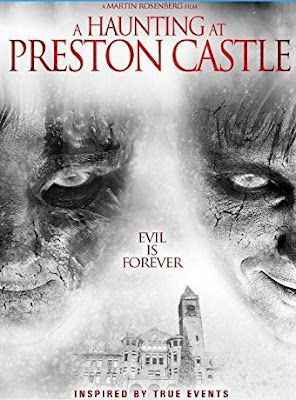 Synopsis: When LIZ (Mackenzie Firgens) returns home on a college break with a broken heart, all she wants to do is hibernate and heal. But her best friend ASHLEY (Heather Tocquigny) coaxes her out of the house for an innocent, diverting rendezvous with high school ex-boyfriend DANNY (Jake White.) What they don't know is that truly terrifying things are about to happen. What begins with three kids seeking excitement within the notorious walls of Preston Castle turns into a grisly nightmare, as Liz, Danny, and Ashley are forced to sort out their past and escape an out of control presence. Trapped inside Preston Castle, they're caught in a horrifying life and death struggle with unstoppable evil spirits.

Martin Rosenberg and co-writer Peter Bailey give a great ghost story using a very creepy, and spooky urban legend, and real life scene of tragedy as the location for "A Haunting At Preston Castle". The story arc, back story, and characters are well developed, even though they are your standard tropes. This is an indie horror so the film quality, although above most low budget horror, is stripped down. It is also a well produced horror with most of the scenes playing out in convincing manner, with creepy, shadowy backgrounds, typical spooky sounds and expected cheap, shock-thrill effects for sudden scares. The cast give authentic, fully committed performances of the three teens fated to fall victim to one evil, vengeful spirit. Of course the real star of "A Haunting At Preston Castle" is the real life tragedy of this haunted location-Preston Castle.

The effects are standard, low-key visual effects and spook gimmicks like falling objects, creepy sounds and characters that seem to freak out uncontrollably over everything! The CGI ghost effects are disappointing, and the entity doesn't spend nearly enough time on screen. The death scenes are pretty much off camera and only revealed during, high emotion, theatrical moments that give the last character standing some real horror to freak out over. Most things are cookie cutter moments that only give small amounts of chills and thrills. The film does have a nice pace that builds some suspense but the pay off isn't quite intense enough to give any real fright-filled moments.

Overall "A Haunting At Preston Castle" only offers a slightly above par horror movie experience. Everything is all been seen and done many-many times before, and we don't get the pleasure of seeing the kills take place. Bummer! Still it is a cool story, on level with past paranormal horrors such as "Boo" and "Death Tunnel". Plus the whole story around Preston Castle and the urban legends that formed after the tragic events is a great vehicle for this traditional 'ghost adventure gone wrong' tale. Even though the ghost is a weak and under-used part of this ghost story and you can guess just how the film will end long before the last act, "A Haunting At Preston Castle" is a nice spooky time killer.
Posted by A Southern Horror Fan