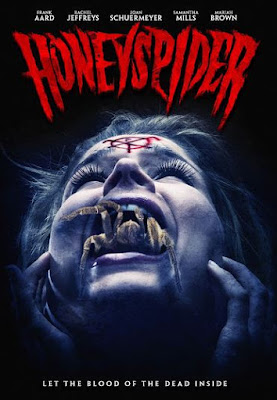 Synopsis: It’s Halloween day in 1989 and college student Jackie Blue wants to enjoy a quiet birthday in the midst of a chaotic semester at school. Her friend Amber has other ideas and persuades Jackie to come to the annual Monster Mash party on campus after her shift at the local movie theater. As murder plays out on the silver screen during the theater's Halloween night Horrorthon, Jackie falls under a strange spell, all while a mysterious stranger watches over her every move. As the night unfolds, Jackie slowly unravels and everyone around her is turning up dead. Jackie finds herself helplessly trapped like prey in a spider’s web, and all she can do is try to survive the night!

Kenny Caperton is the writer of this occult Halloween horror tale, and it is in the same vein as Zombie's "The Lords Of Salem". The story blends aspects of chilling atmosphere, macabre theatrics and almost hypnotic surrealism- the dream sequence that seems to tap into some metaphysical state is some of my favorite moments in the film. True arthouse horror moments. But there is so much about "Honeyspider" that is so cool, retro and  fresh that I just really enjoyed being pulled into the main character's story. And the occult stuff always gets me giddy in horror, especially films that build it around Halloween/Samhain.

The special effects and makeup are complimentary to this dark, mystical nightmare. The atmosphere builds on some nice sounds that instantly throw you back into classic 80's horror. The cool addition of adding a film within a film gives some extra and much needed blood and gore. All of which is practical effects done masterfully. I personally loved the soundtrack from the first notes of the synth just after the intro right up until the very last moments of the film. The mix of songs from various indie genre artists and the instrumental stuff really put you in the attitude and emotion of the film. Nothing about the effects or the 80's setting felt fabricated or cheap. I guess you could argue that some of the props were more retro inspired than actual 80's, but it all looked and felt 80's to me.

Overall "Honeyspider" is a well crafted horror tale with some truly instant classic moments. This is indie/ low-budget film making awesomeness! The cast give stellar performances and the dialog is short but effective. The film does take a slow and steady build up with occult, and suspense thriller mixing together in a methodical pace in away that pulls you into the story, and you just set and watch as it all unfolds. "Honeyspider" takes the best of the horror genre-from it's "new"beginnings in the Corman era, through the occult days, right into the totally awesome slasher/splatter days of the 80's. Definitely check "Honeyspider" out. I do think the ending may bother some horror fans but only if the ending to "The Lords Of Salem" bothered you! I love it and feel it begs a second installment.
Posted by A Southern Horror Fan