My Review Of "It Follows" 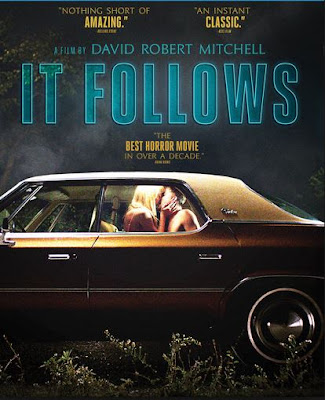 Synopsis: For nineteen-year-old Jay, Autumn should be about school, boys and week-ends out at the lake. But after a seemingly innocent sexual encounter, she finds herself plagued by strange visions and the inescapable sense that someone, something, is following her. Faced with this burden, Jay and her friends must find a way to escape the horrors, that seem to be only a few steps behind.

Honestly I wasn't sure what to expect when I sat down to watch "It Follows". I was pleasantly surprised by the originality, not only in story concept, but visual style and the deeper social messages hidden within this very traditional, and freshly enthralling nightmare. There is almost a sub-tone that is instantly depressing lingering over the film's more macabre atmosphere.  The characters are far from the typical, over-played stereotypes found in horror. There is a subtle not to them, but these characters have more in common with films like "The Chumscrubber" and "Kids" than "Nightmare On Elm Street" or "Slumber Party Massacre". And yet the energy and entertainment was a total celebration of the early modern horror classics found in 80's slasher films.

The cast give great performances bringing these "half-dead, unmotivated, wasted young" formations of teenage 'angsters' to life. The cinematography is more indie than the usual MTV produced films that have come out before "It Follows", and the total lack of product placement that screams 21st century cinema is refreshing. The story is very dark, with some real emotion that seeps in just enough for fans to connect with the horror that is teen logic and lack of parental supervision. Then add the actual nightmare of consequence in the form of a demon, (which is obviously a show of blatant disregard for sexual responsibility, and the spread of STD's), is really entertaining and thrilling to watch play out.

The special effects hang on a mix of chilling suspense as we see the characters reaction to some f'ed up personas that the demon uses while stalking the victims, strong bass driven sound effects that instantly put you on guard anticipating the approaching horror. The special effects stay mixed between really cool practical effects and the necessary CGI stuff. The soundtrack is as off beat, and indie as the filming style choice, and the set designs. Honestly it is all just really impressive, and even though it is Hollywood level production, everything looks and feels so indie.

Overall "It Follows" is a great return to classic horror film movie making, and filled with plenty of terrifying moments to delight most horror fans. The gore is limited, and the kills are on the mild side, but most of the film is just so intense, dark, and filled with chilling atmosphere that the build up to the actual kill/death scene gives good scare. My only disappointment was the f'ed up ending. If you can call it that. Yeah I know it is a creative way to say that the story is not over, because sex and youth making bad choices is eternal, much like the evil and darkness that accompanies all our choices in this complicated life. Still it ticked me off a bit, they could have took a few steps more with that final scene instead of the one they went with, maybe a small reactionary moment with the characters. Anyway "It Follows" is a great modern horror film that deserves props for originality and a definitive return to classic nightmare story telling.
Posted by A Southern Horror Fan