My Review Of "The Exorcism Of Molly Hartley" 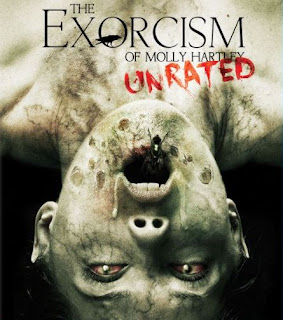 Synopsis: Molly Hartley is all grown up, but the unholy demon inside her lives on. Six years after graduating high school - and discovering that a secret pact assigned her soul to the devil - Molly is suspected of murder and confined to a mental hospital, where she wreaks supernatural havoc on the staff and patients. Her only hope is an exorcism by a defrocked priest looking to redeem himself and save Molly's life before her hideous "transformation" is complete...but Satan has other plans!

Matt Venne is the writer behind "The Exorcism Of Molly Hartley" and he does a nice job respecting the first film's story line. He picks up on the established mythos surrounding Molly's fated pack with Satan. Where the first film was good at masking the true story behind a playful haunting of a emotionally troubled high school girl, Venne exploits the demonic aspect to create a familiar, and obvious story line that pulls from all the possession lore available. It does, at times seem too cookie-cutter and expected, but "The Exorcism Of Molly Hartley" maintains the initial "truth" of Molly's situation established in the first film so I actually enjoyed watching this all play out.

The cast and directing are stellar, both Lind and Sawa give great performances, Lind as Hartley-a victim of circumstance, and Sawa as her savior-who is also soiled by his dealings with the devil as a "failed" exorcist searching for redemption. It all could have been too hokey, redundant, or too contrived, but with Venne's script and Monroe's steady direction, "The Exorcism Of Molly Hartley" manages an enjoyable, creepy possession flick. Of course I love pretty much any film or story that revolves around exorcisms and demonic possession-next to Satanic cult horror-it is one of the few Christian themes I do enjoy in pop-lore.

The special effects stay a steady blend of CGI and practical effects magic. The CGI is done with consideration to how "real" it will look on film so I didn't mind it. It actually works well here, plus there is enough practical, visceral stuff in "The Exorcism Of Molly Hartley" that I have to give props to the FX department. And I always enjoy seeing the creature make-up effects when creating the demon face of the possessed. Even if it all just looks so "Reagan-esque". The soundtrack and musical score are the expected creepy tones, and even though it isn't original, it isn't disposable.

Overall "The Exorcism Of Molly Hartley" gives a nice demonic possession story with a solid story arc, it does seem a bit familiar-there are moments when it falls into the overplayed themes scene in these types of horror films. But-that being said-the movie has a nice devil cult aspect added to it when gives the ending a nice dark ending filled with both the spectacle and the flare of evil agenda that I enjoyed. There is one moment that is more laughable that thrilling-you will see it and know it-but most of the film stays serious, dark, and focused on the demonic fate of Molly Hartley in a more thrilling way than the first film.
Posted by A Southern Horror Fan