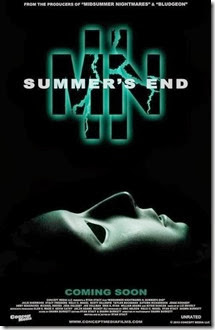 The story in “Midsummer Nightmares II: Summer’s End” continues with that straight forward slasher style that started this franchise ( I say that with wonderful thrills for a future third installment-maybe?!). The film does weaken with some of the story’s dialog on the drama/character interaction segments much as the first one did, at times creating a genuine relationship with the characters situations, however the hardcore writing as far as creating a strong female slasher and fast-paced, all out kill scenes is so much stronger than in the 2011 original film. For me “Summer’s End” just upped the frequency on low budget horror entertainment without having to grasp for gimmicks or new age spins that just don’t allow for a chilling slasher film (i.e. found footage, gory sexploitation grandeur). This film is just honest, grounded true-to-form modern horror. It keeps with the classic concepts but brings in modern contemporary style and atmosphere.

The sound effects and special effects in “Summer’s End” is a bit copy and paste concepts and styles, but not in the this is just cheesy and redundant way, more in the homage, respect for the genre formatted way. If it isn’t broke then don’t go and try and fix it. The effects are classic, creepy aspects that carry you through the film while the soundtrack offers some pretty cool indie tunes that mirror the emotional elements of the film perfectly. Ryan Stacy brings a true respect and love for the genre with his talent and it definitely shows in this film. The special effects are standard slice and dice with more attention paid to pulling off low budget kills that aren’t tacky or cheap looking. It’s body count verses gorefest in “Summer’s End” and that is a nice, clean aspect that makes this film really work on any level. It is a true indie slasher slice of cool, modern horror that I recommend to horror fans, both indie and cult.
Posted by A Southern Horror Fan