Today is Edgar Allan Poe’s birthday! Born  January 19, 1809-October 7, 1849. I would have some really cool pics from my trip to Poe’s residence in Philidelphia when I visited the city in 96, whoever a past roommate thought it better to deny me access to regain my possessions before he set it ablaze to collect the exaggerated renter’s insurance and various credit card policies he purchased on over priced merch. Anyway I shed those negative attempts to rape my soul and have now moved on…

During his lifetime, Poe was mostly recognized as a literary critic. Fellow critic James Russell Lowell called him "the most discriminating, philosophical, and fearless critic upon imaginative works who has written in America", suggesting – rhetorically – that he occasionally used prussic acid instead of ink. Poe's caustic reviews earned him the epithet "Tomahawk Man". A favorite target of Poe's criticism was Boston's then acclaimed poet, Henry Wadsworth Longfellow, who was often defended by his literary friends in what would later be called "The Longfellow War". Poe accused Longfellow of "the heresy of the didactic", writing poetry that was preachy, derivative, and thematically plagiarized.

After his brother's death, Poe began more earnest attempts to start his career as a writer. He chose a difficult time in American publishing to do so. He was the first well-known American to try to live by writing alone and was hampered by the lack of an international copyright law. Publishers often pirated copies of British works rather than paying for new work by Americans. The industry was also particularly hurt by the Panic of 1837.Despite a booming growth in American periodicals around this time period, fueled in part by new technology, many did not last beyond a few issues and publishers often refused to pay their writers or paid them much later than they promised. Poe, throughout his attempts to live as a writer, repeatedly had to resort to humiliating pleas for money and other assistance. 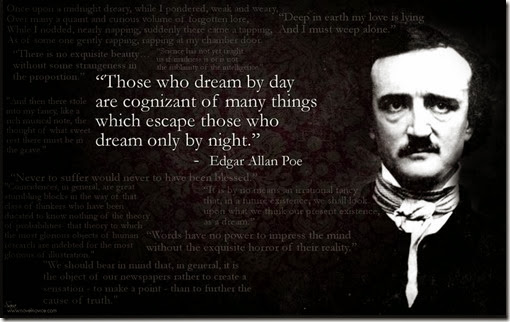 Poe's writing reflects his literary theories, which he presented in his criticism and also in essays such as "The Poetic Principle". He disliked didacticism and allegory, though he believed that meaning in literature should be an undercurrent just beneath the surface. Works with obvious meanings, he wrote, cease to be art. He believed that work of quality should be brief and focus on a specific single effect. To that end, he believed that the writer should carefully calculate every sentiment and idea.

In "The Philosophy of Composition", an essay in which Poe describes his method in writing "The Raven", he claims to have strictly followed this method. It has been questioned, however, whether he really followed this system. T. S. Eliot said: "It is difficult for us to read that essay without reflecting that if Poe plotted out his poem with such calculation, he might have taken a little more pains over it: the result hardly does credit to the method." Biographer Joseph Wood Krutch described the essay as "a rather highly ingenious exercise in the art of rationalization".

Eureka: A Prose Poem, an essay written in 1848, included a cosmological theory that presaged the Big Bang theory by 80 years, as well as the first plausible solution to Olbers' paradox. Poe eschewed the scientific method in Eureka and instead wrote from pure intuition. For this reason, he considered it a work of art, not science, but insisted that it was still true and considered it to be his career masterpiece. Even so, Eureka is full of scientific errors. In particular, Poe's suggestions ignored Newtonian principles regarding the density and rotation of planets.

My favorite works by Poe, besides his poetry, are “The Black Cat”, “The Murders In The Rue Morgue” , “Eleonora” and “The Pit And The Pendulum”. Plus the "The Philosophy of Composition". Oh and just to state it-my fave poems are “The Raven”, “Eulalie”, “The Conqueror Worm” and “Lenore”.

BY EDGAR ALLAN POE
Lo! ’t is a gala night
Within the lonesome latter years!
An angel throng, bewinged, bedight
In veils, and drowned in tears,
Sit in a theatre, to see
A play of hopes and fears,
While the orchestra breathes fitfully
The music of the spheres.
Mimes, in the form of God on high,
Mutter and mumble low,
And hither and thither fly—
Mere puppets they, who come and go
At bidding of vast formless things
That shift the scenery to and fro,
Flapping from out their Condor wings
Invisible Wo!
That motley drama—oh, be sure
It shall not be forgot!
With its Phantom chased for evermore
By a crowd that seize it not,
Through a circle that ever returneth in
To the self-same spot,
And much of Madness, and more of Sin,
And Horror the soul of the plot.
But see, amid the mimic rout,
A crawling shape intrude!
A blood-red thing that writhes from out
The scenic solitude!
It writhes!—it writhes!—with mortal pangs
The mimes become its food,
And seraphs sob at vermin fangs
In human gore imbued.
Out—out are the lights—out all!
And, over each quivering form,
The curtain, a funeral pall,
Comes down with the rush of a storm,
While the angels, all pallid and wan,
Uprising, unveiling, affirm
That the play is the tragedy, “Man,”
And its hero, the Conqueror Worm.