My Review Of “Blood Slaughter Massacre” 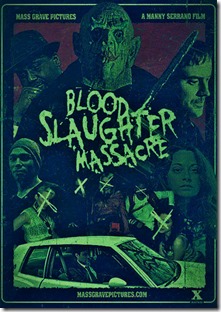 Indie horror is strong and thriving today, thanks in part to the efforts and creativity of low budget Indie directors and the whole horror community, who embrace it. This is very evident in the indie slasher “Blood Slaughter Massacre” by Mass Grave Pictures. The film is a total tribute and celebration of all that was great about late 70’s and early 80’s slasher flicks that still dominate the horror fans psyche to this day. Directed by Manny Serrano, the film pays homage to those iconic moments within the classic horrors of “Halloween”, “Friday The 13th”, “Madman” and others, while creating a completely individual cabal of rising evil. In “Blood Slaughter Massacre”, Officers Fincher and Cobb are called out to investigate a noise complaint, and what they find is far worse; twenty-four people, murdered in cold blood. The murderer escapes, and the Havenwood Police Department cover it up, inventing a story about an out-of-control fire. Ten years later –now detectives- Fincher and Cobbs, while investigating a girls murder, it looks as though the killer has returned to Havenwood. And this time he has a new diatribe guiding is malicious nature.

“Blood Slaughter Massacre” is a bit of a dichotomy in that it does create an elaborate plot which is supported by heavily built characters, and yet a lot of the story unfortunately unravels as the story grows. The robust, affirmative character relations, to the over all plots intent, flows more like a really bad cardiogram than a healthy pulse-pounding saga. That is really the only thing that hinders the film from being the massive indie slasher that is should be. Sometimes when writing a story – less is more. Especially with dialog relationship to the characters. Some moments, when explaining the ‘whys and hows’ of the connection to the enveloping plot, the lines seem over-indulgent and begin to wear on the story lines continuity. Now, that is the bad.

The good things about “Blood Slaughter Massacre”- is the complete tributary nature of the film to classic horror movies. The little nods and moments that highlight a certain film’s influence on the writer and director’s love of this genre. The total ‘I love the 80’s’ vibe allows for a bit of fun in the films visual appeal. This film, unlike a lot of homage-throwback horrors takes a more serious approach to the slasher genre and I respect that. It gives similar atmosphere to the cult classic days of horror movie making. The soundtrack is thrilling and builds those same chillingly eerie, emotional connections between the story and the viewer. There is blood, blood, and more blood splattered all through this film, which eases the frustrations I had with the psychological aspect of the story that rested on the characters. The killer was a menacing, unstoppable killing machine with a plain. I loved that, that fact that he uses the dark arts as a justification for choosing his victims, hits a sweet spot for me in horror. I love films that utilize black magic in the plot-even slasher films.

Even though it sounds like I may not have enjoyed “Blood Slaughter Massacre” – I did. It is a cool low-budget flick, with a serious approach to the genre. It offers a creepy killer, and even though the plot seemed to be more than necessary it still offered a unique spin while still paying tribute to classic horror. The blood, gore and special effects where above standard for this level of Indie production. Most of the kill scenes allowed a face view graphic slaughter-and the pay off was a nice reward for the scene and the viewer. This film is a cool little indie flick that fans of the slasher genre will truly enjoy. As far as over all feeling of the film I am split. I loved everything about this movie except the actual character building story lines and their relationships to one another. Every thing else was top shelf-low budget- indie horror enjoyment.
Posted by A Southern Horror Fan