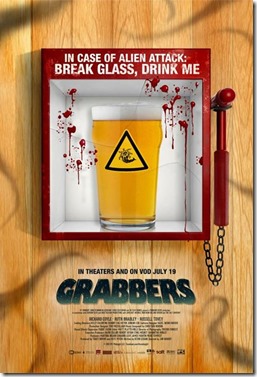 “Grabbers” is a modern creature-feature, horror-comedy from the Emerald shores of Ireland. The film is directed by Jon Wright, who directed the 2009 dark horror, social satire “Torment”, which dealt with class warfare and social injustice within society through the microcosm of the politics of life among the student body. That film was a serious address to the principles of an action-consequence scenario set in a traditional-styled horror. “Grabbers” is a lighter, more fun-loving satire about Irish stereotypes, inebriation, and a celebration of community and culture facing an identity in transition,set in total b-movie sci-fi, horrror-comedy fanfare. The movie stars Richard Coyle, Ruth Bradley, Russell Tovey and Lalor Roddy.

In “Grabbers” a small  hamlet on an Island just of the coast of Ireland's mainland, finds themselves in the middle of an alien invasion. These are not the little green meanies bent on planetary domination. In this story the aliens are huge ravenous Kraken-esque creatures that find our world just one big smorgasbord . It is up to the villagers to fight off these creatures and save the planet, but in order to do so they have to approach the situation through beer goggles. Once they learn that the only way they can stay alive, and not seem tasty, is to get really really drunk! The creatures love blood, need it to thrive and procreate. Alcohol is like poison to them, so it becomes a salvation to the community. Nothing but fun can come from this! It is a truly entertaining set-up, and a total Irish embrace of preconceived notions of the Irish people by the rest of the world. The film is pretty much a statement that says they are owning it!

For me personally, “Grabbers” is one of those rare films that celebrates everything about classic b-movie creature-features in a modern way without looking like it is making a big effort to do so. It gets it right! The film flows smoothly and effortlessly, which makes it an easy, fun viewing experience. There is no real odd moments were the acting seems coerced, or the lines fall flat. You don’t even have to be Irish, or from the UK, to get the humor to relate to the film. “Grabbers” maintains a level of story and dialog that is truly universal. Not since “Killer Klowns From Outer Space” and “Tremors” have I enjoyed a film like this so much. The creatures dominated every scene they were in, with care and quality taken to how best to represent the monsters on screen. They didn’t look cartoonish or ridiculous. The actors were funny and likable. The funny was actually funny. I have to say that “Grabbers” is a really great film, and one of the best horror-comedies that I have seen in a great while.
Posted by A Southern Horror Fan