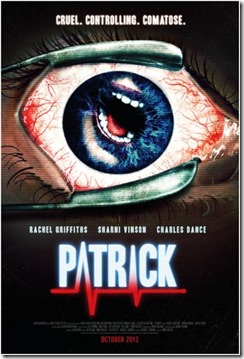 Patrick lays comatose in a small private hospital, his only action being his involuntary spitting. When a pretty young nurse, just separated from her husband, begins work at the hospital, she senses that Patrick is communicating with her, and he seems to be using his psychic powers to manipulate events in her life.

When Kathy, a nurse who has recently separated from her boyfriend, begins working at the clinic, she is instructed to care for Patrick. She is disturbed by Roget’s treatment of him and somehow feels that Patrick is trying to make a connection with her. When Kathy realizes that the lifeless murderer can communicate, she is shocked but compelled to prove her theory. Patrick has psychokinetic powers, which he uses to talk to Kathy by transferring his thoughts to her computer. As Patrick’s communication becomes stronger, strange and terrifying events begin to occur. Patrick has feelings for Kathy, and his affection is about to manifest itself as a deadly, bloody obsession.