Crowd Funding Campaign For “The Reunion” 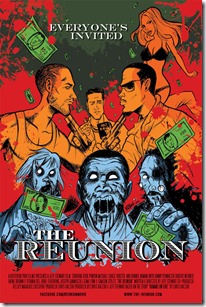 The Reunion is a crime thriller built into a horror movie.  It's Dawn of the Dead meets The Wire. There is a crowd funding campaign happening right now over at Kickstarter for the project to “polish up” the film with post-production work that would elevate the over all quality of the picture to the level of the crew and cast’s dreams for the the film. “The Reunion” is directed by Jeff Stewart.

The story revolves around Braxton, Ben & Felix, three friends who end up in the drug trade.  When Ben is sent to jail, Braxton decides to call it quits and become an honest businessman.

Years later, Ben is released early and threatens to destroy everything Braxton has built.  With no choice, Braxton enacts a plan to "deal" with his former friends and business partners.  But before he can take action all hell breaks loose, literally.

Now the former friends must work together to stay alive against an onslaught of the walking dead.