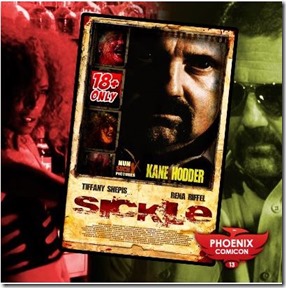 The grindcore horror film “Sickle”, starring Kane Hodder, has announced that it will have it’s world premiere at this years Phoenix ComiCon. Directed by Robert Conway, the throwback to classic road horror grindhouse films of the 70’s and 80’s, also stars Tiffany Shepis, Rena Riffle, Dustin Leighton, Tarin Carter and Owen Conway. On Saturday, May 25 at 9:00pm until 11:30 will be horror fan’s chance to see the film and get in on a little Q&A with the cast and crew. Phoenix ComiCon will be held on May 23rd-26th at the Phoenix Convention Center. If you haven’t seen the trailer yet (I am sure you all have) check it out below.

A group of stick-up kids rob a mafia run strip club and head for the border but when they enter the town of Redstone, they find that crime is a dish best served cold! Kane Hodder (Friday the 13th, Hatchet) takes the title role as Sheriff Slade Sickle, a man with a true appetite for justice! The film co-stars Tiffany Shepis (Nightmare Man, Dark Reel) and Rena Riffel (Showgirls, Mulholland Dr.) in this carnage-filled tribute to American Grind-House cinema.