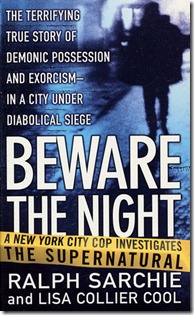 The supernatural thriller “Beware The Night”,  directed by Scott Derrickson has been issued a release date. The movie is set for a theatrical release on January 16th 2015. (the gods willing and the apocalypse don’t rise!) The film will star Eric Bana as the cop. Also in the cast are Edgar Ramirez will play the priest and Olivia Munn. Jerry Bruckheimer Films will produce.

"Beware the Night is a project we’ve been developing for many years” says Bruckheimer, “ confident that a story which combines the paranormal with a gritty New York City police story is both original and strongly appealing to audiences.  We’re excited to work with Clint Culpepper and his team at Screen Gems, and director Scott Derrickson, who has emerged as a uniquely talented filmmaker with the ability to both entertain and terrify audiences in equal measure.”

“Beware the Night” is the story of a New York cop who meets a renegade priest when he is pulled into a case which the priest convinces him, against the officer’s religious beliefs, is demonic related. Together they work to solve the case and combat the paranormal forces working against them.