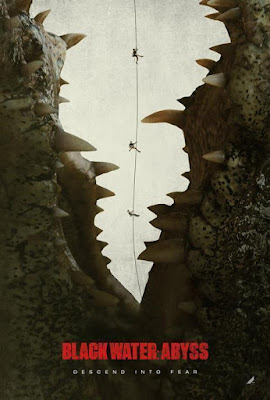 Check out the trailer for "Black Water: Abyss". The film is set to release this August. It is directed by Andrew Traucki (The Reef) and Michael Robertson . The follow up to 2007's "Black Water" stars Jessica McNamee, Luke Mitchell, Amali Golden, Anthony J. Sharpe, and Benjamin Hoetjes .

Based on a real-life crocodile attack, “Black Water: Abyss follows an adventure-loving couple who convince their friends to explore a remote cave system in the forests of Northern Australia. With a storm approaching, they abseil into the mouth of the cave, which starts to flood and find themselves threatened by a pack of apex predators – dangerous and hungry crocodiles. As danger mounts, long-kept secrets emerge and the friends turn on each other in a frantic fight for survival.”

"Black Water: Abyss" is due out August 7th On Demand.