My Review Of "Among Them" 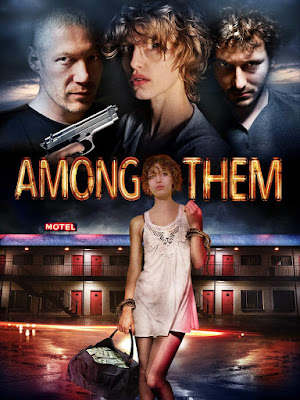 "Among Them" is a crime thriller with a slight "faux" paranormal twist. The film is directed by Kevin James Barry and stars Jonathan Thomson, Dan Liebman and Evalena Marie. Focusing on a heist "Among Them" spirals into a psychological nightmare that will test your sanity.

After a botched heist, two bank robbers and their unwanted hostage retreat into a seedy coastal motel in the dead of winter. When their boss doesn't show up and their tickets to freedom go missing, the three of them must battle through their deteriorating mental state and find a way out before they turn on each other.

"Among Them" is layered with crime thriller bromide, faux paranormal teases, and character complexity that is as confusing as it is engaging. The story keeps you guessing from the moment the cast decide to hold up in a very disturbing locale. The film starts off almost benign, a bank robbery sends criminals on the run, but it doesn't take too long to realize that there is more going on.

The acting is a bit stiff, the cast seems committed to the characters, but also feel slightly reserved in portraying them. That being said, I did find the characters fully fleshed out and relatable. "Among Them" does start out with a slow pace but midway things pick up and the film pulls you in. But like I said, the story is super complex and slightly confusing. It keeps you wondering what is really going on right until the end.

The action and horror elements are typical paranormal-esque gimmicks that may or may not be all in the characters' minds. It all is very entertaining and the overall concept is both familiar and yet somewhat original. The closest film I can compare this too is "Soul Survivor", but that may not really be accurate. Like I said, the film kept me guessing.

Overall "Among Them" is a well acted, entertaining film. I am not 100% sold on the ending but kind of think I know what Barry was going for. It will be up to individual viewers to decide whether or not "Among Them" is a film to like. The faux paranormal moments are typical and the story does get a bit muddled toward the end. Still I found a lot about the film entertaining. (3/5)