My Review Of "Evil Little Things" 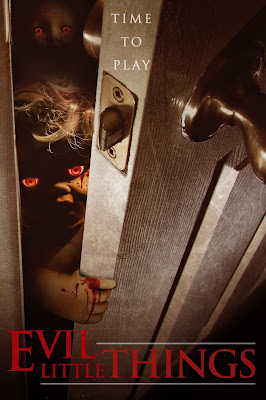 Horror anthology "Evil Little Things" is a wicked little film that plays like 'Two Minute Horror Stories' but with a traditional feel of "Creepshow". It is directed by Matt Green and stars Zach Galligan, Hannah Fierman, Courtney Lakin and Jonathan Horne.

A young boy finds a mystical toymaker with stories to tell. The first is of a leprechaun seeking revenge on a defenseless family. The second is of a doll who works evil on her fragile owner. The toymaker gives the boy a clown named Giggles. Clowns are supposed to be the guardians of happiness, right? These Evil Little Things will cause you many sleepless nights.

The story about the leprechaun is probably the longest of the two shorts that make up the body of the film. It is a cute story, it isn't really scary but it has a very creepy atmosphere that permeates the story. It does seem to take longer than necessary to tell, and the horror elements are kinda minimal. Still the killer leprechaun doll used is creepy as it gets and it ends with the classic twisted ending we all love about classic anthology series.

The second of the stories deals with an evil porcelain doll that has a jealous streak fed by the demonic. It is a pretty familiar tale, but still it is told nicely. It is a bit shorter than the first and there is a little bit more horror in this one. Mostly paranormal-esque gimmicks and occult themes toward the end. I was crazy about the choice of voice for the Patty doll but she looks evil. Plus the story had another wicked little ending.

The wraparound is my favorite story. It is classic "Creepshow" style storytelling. The first half plays as your basic set up for the two middle stories, but it starts out with a hint of domestic violence. The second half is the fun part, and although it is short it has the most horror in the anthology. Plus a clown doll that goes all demony is always a treat.

Overall "Evil Little Things" is a cute horror anthology. I do enjoy a bit more horror in the films, but I did appreciate the throwback feel of the stories. Plus I am a sucker for evil, creepy doll movies. "Evil Little Things" will find a fan base, it is pretty PG so hardcore splatter/gore fans may not get it, but check it out and decide for yourself. (2.5)
Posted by A Southern Horror Fan