My Review Of "A Nun's Curse" 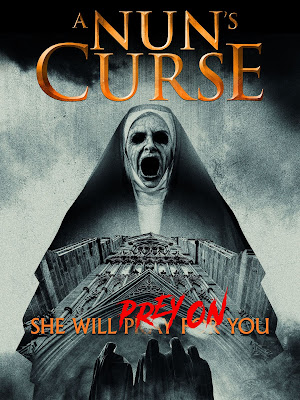 "A  Nun's Curse" is a psychological horror that plays on themes of psychosis with hints of paranormal horror and urban legend. The film is directed by Tommy Faircloth, and starring scream queen Felissa Rose, Erika Edwards, Kristi Ray, Damian Maffei, and Gunnar Willis.

On a weekend trip, a group of friends are forced to seek shelter inside an abandoned prison where a nun named Sister Monday had once been assigned. During her time at the prison, Sister Monday was suspected of killing prisoners who were serving out their sentences but before she could be questioned, she disappeared. Once inside the prison, they will learn the terrifying truth.

I have to say, I am on the fence about this one. The film is a standard horror film that stays within traditional horror tropes. It is a little to familiar, with a lot of the material having been seen and done before. And yet, it the cinematography is good, it taps into that comfortable horror styled atmosphere, and it offers a somewhat memorable baddie in Sister Monday.


With "A Nun's Curse" I think my biggest complaint is just how long it takes before anything significant happens. For the first 40 or so minutes it is filled with too much dramatic dialog, exposition and melodrama that really eats into the runtime. But from there on things get somewhat interesting and the story transitions into a full on horror story. Again, the atmosphere is cool. I found myself really starting to get into.

The horror elements are pretty well done. There is some stereotypical paranormal styled moments that are your standard gimmicks used. The best part is that the kills are done with practical effects that look good. The down side that the time starts running out on the film so the kills seem rushed.

Overall, as much as I wanted to really like "A Nun's Curse" there was just more that I didn't like. I enjoyed Felissa Rose as Sister Monday but it takes too long to get her on screen. There is a "surprise" twist to the ending that will become clear before it is intended to, but it is a cool one. Unfortunately instead of ending the film there the story goes for another, weaker ending that kinda ruins things. As always check it out but don't expect much. It has some moments that are interesting, but not everyone will enjoy this one. (2/5)
Posted by A Southern Horror Fan