My Review Of "The Open House " 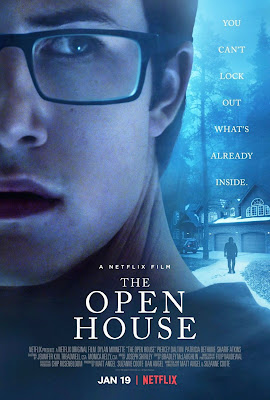 "The Open House", written and directed by Matt Angel and Suzanne Coote, released on Netflix January 19th 2018. The horror film stars Dylan Minette, Piercey Dalton, Shari Atkins, Patricia Bethune and Aaron  Abrams. It is a temped nightmare scenario that plays on fears of home invasion- "the killer is in the house".

Following a tragedy, a mother and her teen son move to a relative's vacant vacation home, where eerie and unexplained forces conspire against them.

Angel and Cootes' script is rough to watch at times, too many times, to be honest. The concept, though generic as it may be,  held promise, but the indecision is a killer that just keeps hacking at moment after moment in this movie.  A strong beginning worthy of any horror story setup quickly falls short as aimless and almost random moments clog the film's story.

The effects are minimum, with most the film forcing the viewer to latch on to creepy atmosphere, character play that feels detached, and shock gags that seem more at home on shows like 'Evil Things' or 'A Haunting'. With on exception.  The final act- my favorite part. It was bloody brutal and horrific in its cruelty. Still not enough to save "The Open House".

Overall this is a sad "should'a', could'a', would'a'" experience through and through. The beginning should have catepolted "The Open House" into a nightmare setup. The mother-son in unknown environment,torment both by circumstance and evildoers, should have brought out scares and fears that took aim at the true plot, and the ending with the reveal and terrifying nature would have hit home and satisfied horror fans. But hey- "should'a', could'a', would'a'" -right. (2/5)
Posted by A Southern Horror Fan