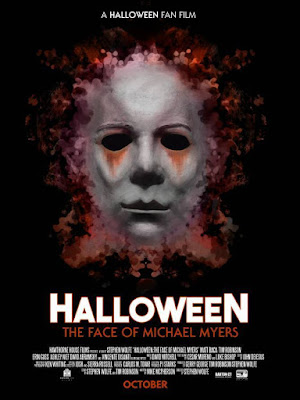 Let's face it,  Fan Films are fun! They don't always hit the mark, but they are the ultimate love letter to that something special, in this cause a horror mythos as iconic and legendary as Santa Claus and RuPaul- "Halloween" - to be more specific - the story of Michael Myers. Several earlier Fan Films have emerged over the years and personally, I hope they continue . And so do Hawthorne House Films, who has  announced an extended campaign on Indiegogo for upcoming "Halloween: The Face Of Michael Myers".

SYNOPSIS: Forty years after the malevolence that unsettled the suburban community of Haddonfield, IL, a new set of murders unravels the peace of this sleepy town. Dr. Benjamin Petersen (Matt Baca) is charged with the psychiatric evaluation of the young man who butchered his entire family, claiming the specter of Michael Myers entered his body to satisfy its bloodlust. The conversations between patient and doctor digs deep into the dark territory of Billy’s (Tom Robinson) fractured psyche that may unleash another blood-soaked Halloween night threatening Haddonfield with the violence that never really left, only hid beneath the veneer of the waspy enclave.

The development is being overseen by Vincente DiSanti, writer/director of the popular Friday the 13th fan film Never Hike Alone and executive produced by Volumes of Bloodcreator P.J. Starks who are lending their assistance and expertise to this production. With cast and crew assembled, the project is seeking to fulfill a $13,000 fundraising goal on the Indiegogo platform. Offering a variety of unique and inspired horror perks for donating fans, the perks include exclusive pins, posters, shirts, and more! The campaign begins July 24th and runs through August. Production is slated to begin late August/Early September with a October 2018 release.