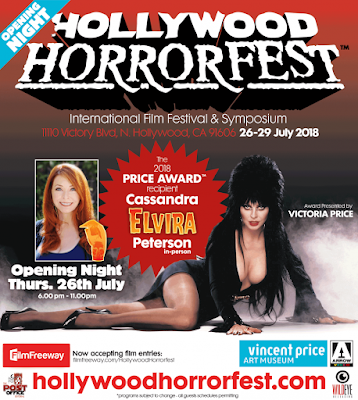 
The Award, affectionately known as the ‘Vinnie’ in honor of legendary horror master Vincent Price, was created specifically for HHF in order to celebrate Price’s legacy by ‘honoring an artist whose work has achieved equally iconic status’. Peterson's memorable creation of Elvira, according to festival founder/director Miles Flanagan, is definitely worthy of celebration.

"I couldn't imagine a more perfect honoree for our festival re-vamp than Cassandra Peterson, “said Flanagan. “She is classic Hollywood horror personified and keeps the Vincent Price style of horror - and humor - alive through Elvira.”
Price’s daughter Victoria will present the award to Peterson on the Horrorfest’s Opening Night, Thursday, July 26 (the festival runs through July 29) and will also feature Price's moving and enlightening lecture about her father and his namesake Vincent Price Art Museum (VPAM).

The evening will conclude with a rare screening of the star’s 2001 comedy-horror cult classic, Elvira’s Haunted Hills, with appearances by director Sam Irvin and actors Mary Scheer and Scott Atkinson (more guests TBA). The film is dedicated to Price and is a loving tribute to his films, particularly Roger Corman's Poe cycle and the classic The Pit and the Pendulum’.


For her part, Peterson has been inspired by Price ever since watching his film The House on Haunted Hill when she was in 2nd Grade. "I fell in love with that movie and Vincent Price," said Peterson. “When it comes to all things spooky, you simply can't beat Vincent Price; he became my hero.”

The four-day event continues to work closely with VPAM, raising both awareness and funds for the East L.A. museum through celebrity raffles and proceeds from the box office. HHT is bigger in scope, and currently redefining the indie horror festival in 2018, offering filmmakers and fans the occasion to get together, meet their heroes, make deals or just talk horror.
The festival is also giving prizewinning filmmakers the opportunity to have their work shown as part of the second season of the Amazon horror anthology series Hollywood Horrorfest Presents. "It's a non-exclusive deal and a great way for shorts to be seen by a wider audience and generate income for filmmakers,” said Flanagan.

The festival will also aim to teach filmmakers "everything they've always wanted to know about filmmaking but were afraid to ask," Flanagan said. "We'll have panels on everything you really should know both before and after you've made a film, featuring sales agents, publicists, distributors, aggregators, producers, financiers and filmmakers who've had both good and bad deals in the past. Believe me, it'll be a real eye-opener."
Debuting in 2014, at L.A's New Beverly Cinema, Victoria Price awarded director Joe Dante the very first Price Award, and character actor Dick Miller received his Lifetime Achievement Impact Award from good friend Dante. The following year the festival had to unexpectedly find a new venue after the Beverly changed policies regarding the screening of digital works.

"It was actually a good thing - not being able to use the Beverly anymore. It made me rethink the festival," said Flanagan. "Screenings of new films are all well and good, but then what? In most cases the filmmakers just leave the theaters and go home. And their films remain unseen, unsold and they learn nothing about the industry. I wanted to change all that."
Flanagan spent several years researching the best venues for this 'new' improved festival. And found it in the definitely retro-kitsch ambiance of the British ex-pats social club, The Mayflower.
“What makes the new venue unique is that it also has a full, and nicely wood-paneled, bar with quite a ghostly history. Imported from the UK in the 1920s, it was used in a notorious and quite deadly L.A. speakeasy. Those original speakeasy owners literally made a killing over that bar… so I’ve been told. It's the perfect place to socialize and network during the festival. All the best deals and friends are made in festival bars… plus the prices are very, very reasonable.

"It has everything - a bar, its own parking lot, a fabulous theater and table space, too. We have so many great screenings and guests to announce in the coming weeks. Having such a social and intimate venue makes it so much better.
“We currently have over $6,000 - and rising each day - worth of prizes, awards and benefits including hundreds of DVDs & Blu-rays from Wild Eye Releasing and Arrow Films,” Flanagan added, “plus we’re giving out free Elvira’s Haunted Hills one-sheet posters on opening night, courtesy of Cassandra Peterson… while they last!”
HHF is accepting film and script entries through FILM FREEWAY. Enter now as regular rates end on June 16.