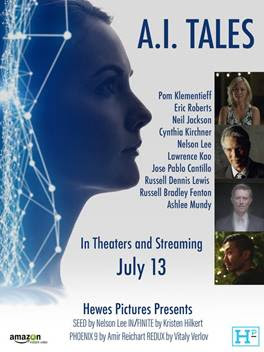 A.I. Tales is a sci-fi anthology series released by Hewes Pictures, a company specializing in short film. The  collection of stories feature world-renowned talent such as Pom Klementieff ("Guardians of the Galaxy", "Avengers"), Eric Roberts ("The Dark Knight"), Neil Jackson ("Westworld") among many others. Titles include: SEED by Nelson Lee, IN/FINITE by Kristen Hilkert, PHOENIX 9 by Amir Reichart and REDUX by Vitaly Verlov.

"Seed" - In a future where draconian laws are enforced to combat over-population, Nathan’s 40th birthday will be his last. Amidst a parade of family and friends saying their goodbyes, an old lover emerges from his past. In the end, how much will he be willing to sacrifice in order to get back the life that was lost?

The story is an emotional character play that holds you close as the true nature of this tale unfolds. The dark and somewhat conflicting pull between celebration and sorrow meld beautifully in a heartfelt attempt to address a society driven to extremes to handle population control.

"In/finite" - In the very near future, Jane, the lonesome, charming black sheep of her family, discovers that she has the uncontrollable urge to leave this Earth; as sometimes having a family and friends who love you doesn’t outweigh the inexplicable pull towards something – greater.

In the second short we find a more foreboding and sadness that unfolds with mystery as to the main character's obvious personal struggle. As poignant and emotive as the first story,  "In/finite" is captivating and personalized. The complex nature of the situation offers both conflict and melancholy. It shows an aspect of colonization never really explored in sci-fi from this point of view.

"Phoenix" - After a global nuclear war has turned earth into a scorched wasteland, a struggling group of survivors discovers a secret installation that offers a new beginning – but not without a catch.

This short film gets closer to the more familiar tropes of sci-fi, exploring the turmoil of self-annihilation and man'said hope-filled journey back to salvation. Only it unfolds into a tale of sinister styled parable more related to 'Outer Limits'. Still it is a clever, emotionally charged story.

"Redux" - A scientist must send a warning message through time before he gets killed by an assault team.

The last story gives us anow original spin on a very classic tale. With an equal amount of sci-fi and melodrama "Redux" continues the energy levels up and probably is the only short in the anthology which maintenance a measurable amount of positivity. A loose interpretation of a "happy ending". Maybe.

Overall "A.I. Tales" is a intelligent, emotional exploration into futuristic concepts. The stories are strong and cleverly written. The acting is exceptional and filled with heart. An originally told collection the delivers dark, relatable entertainment for the sci-fi fan. (4/5)
Posted by A Southern Horror Fan