My Review Of "She Kills" 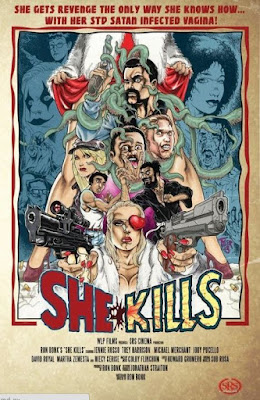 "She Kills" is grindhouse meets camp with a dose of sexually transmitted trash cinema all in a wonderfully tacky attempt to celebrate all the good and bad of b-movie, drive-in cult film genre. The film is directed by Ron Bonk and stars Jennie Russo, Trey Harrison, Michael Merchant, Jody Pucello, David Royal, Martha Zemsta. "She Kills" follows a young woman who finds the power to overcome tragedy. Of course that power comes from her pussy which drives all men, who get a whiff, wild and hungry.

Synopsis: Sadie's life is destroyed when a vicious gang called 'The Touchers' targets her for their sadistic fantasies after witnessing her sexy but innocent naked frolicking in a nearby field. On her wedding night they attack her and her husband Edward, brutalizing both of them. But during the attack the virgin bride discovers a dangerous secret about her body - she is cursed with the legendary 'Fire Crotch,' a condition where Satan has laid claim to her vagina. After visiting her fortune teller friend Casparella, a space exorcism is attempted on her meat flaps, but it only ends up unlocking secret hidden powers inside her. Her hatchet wound becomes lethal, her most deadly weapon in her thirst for revenge against The Touchers and her fight against lustful men everywhere!

Ron Bonk's story is a hilarious ride into insanity, and sexuality. "She Kills" takes all the character flaws that fans of cult cinema celebrate in the b-movie genre, mixes it with a heavy dose of campy tasteless fun, and pops out an unhealthy amount of fun, tacky, gory awesomeness. Honestly I think this may very well be the first time I have seen camp and trash cinema from a straight man's point of view. Normally John Waters' movies, and the few new indie directors in the LGBT community are the ones who bring these awesome blends of style, and humor together in such an over-the-top way-and make it work. I laughed a lot while watching this movie. Everything is so visual, spoofy, and insane. Ron Bonk "goes there" in his play on the whole "revenge kill", grindhouse genre.

The special effects in "She Kills" are cheap, practical effects that are obviously cheap, but the way that they are used it doesn't matter. They are meant to be seen as cheap, practical, gory, and gross. The special effects, music, and cinematography style that Bonk goes with in this cult cinema comedy are all meant to be exactly what you see on screen, and it is all just fun, cheeky, entertaining madness. Overall "She Kills" is a great indie flick for the spoof, grindhouse/trash cinema fans who really dig the cheap and tacky stuff. It is a film that I will have on my shelf and watch over and over. Now this is not gonna appeal to the straight laced, serious grindhouse, revenge cult cinema movie goer, because everything is just so over-the-top, and yes you can even say - "shticky". Still I feel everyone should check out "She Kills" out. It will make you laugh, gag, and above all else you will be entertained.
Posted by A Southern Horror Fan