My Review Of "The Entity/La Entidad" 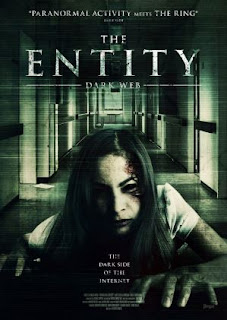 Synopsis: A group of students discover a terrifying "reaction video" on the internet. Their search to discover the whereabouts of the video reveal an obscure corner of cyberspace known as the Dark Web where a curse brings death to all who witness the video.

"The Entity" is comparative to the many found footage horror films that play with paranormal themes that Schuldt does manage to bring some exciting and chilling fresh perspective to the genre. The story is a new, creative urban legend that centers around a cemetery and  a horrifying backstory that involves a hateful priest, a condemned woman and a vicious demon summoned. The concept does play on familiar and popular themes in this branch of the horror genre, the more classic, Gothic tales of evil begetting evil, but instead of feeling redundant, "The Entity" is entertaining.

The cast are very committed to their characters, and give decent performances. There are times when they come off as more "acting" than authentic but it isn't enough to bring down the atmosphere that Eduardo Schuldt creates in "The Entity". Plus there is enough of those reactionary scenes mixed in with the character building moments to keep things thrilling. Some characters are more captivating than others, I was partial toward Benjamin, and Lucas.

The special effects are the expected blend of spooky, paranormal CGI and practical gore which really work well in "The Entity". The demon is never defined to the level that becomes hokey, or ridiculous. It actually maintains a creepy, shadowy presence reminiscent of haunting stories. Only you can tell this isn't some vengeful spirit, it is a demonic "thing" that is blood thirsty. The gore is visceral and somewhat celebrated in the scenes surrounding deaths of the doomed cast. A real plus for "The Entity".

Overall I enjoyed "The Entity". The very beginning gives an impression of "oh another found footage horror" so I was quick to not think I was going to like the film. However within 20 minutes I was already digging the atmosphere, the themes, and the controlled, well constructed way that Eduardo Schuldt utilizes the blend of video diary, found footage within the "film student" concept. True at times it doesn't quite feel all that compliant with traditional found footage style, the shots aren't as grainy or choppy as you normally get, everything seems pretty HD here and too concise, but the movie was entertaining, thrilling and full of screams and blood so I was happy.
Posted by A Southern Horror Fan