Meet The Cast In BTS Featurette For 'Ash VS Evil Dead' 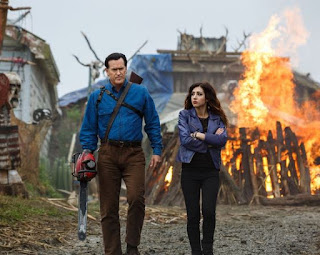 'Ash VS Evil Dead' is probably the most anticipated and buzz worthy series hitting TV and Streaming this Fall. The series kicks some deadite ass on Halloween night via Starz at 9pm. Check out this BTS featurette and meet the full cast of 'Ash VS Evil Dead'.

The series stars Bruce Campbell, Jill Marie Jones, Ray Santiago, Dana Delorenzo, and Lucy Lawless. Episode 1 of the 9 episode season is directed by creator Sam Raimi. “Ash vs Evil Dead” follows Ash, the stock boy, aging lothario and chainsaw-handed monster hunter who has spent the last 30 years avoiding responsibility, maturity and the terrors of the Evil Dead. When a Deadite plague threatens to destroy all of mankind, Ash is finally forced to face his demons –personal and literal. Destiny, it turns out, has no plans to release the unlikely hero from its “Evil” grip.