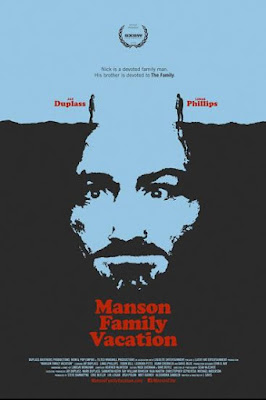 The official trailer has been released for indie drama/thriller "Manson Family Vacation". The film is directed by J. Davis and stars Jay Duplass, Linas Phillips, Tobin Bell, Leonora Pitts, Davie-Blue. "Manson Family Vacation will be released VOD/ digital platforms such as iTunes on October 6th. It will debut on Netflix October 27th.

"Nick Morgan (Jay Duplass) has it all: a loving family, a beautiful home and a successful law practice in Los Angeles. His estranged brother Conrad (Linas Phillips) has nothing but a backpack. When Conrad shows up for a surprise visit, all he wants to do in town is go to the infamous Manson Family murder sites. Reluctantly, Nick joins him and ends up on a road trip that leads the brothers into the modern-day world of Charles Manson.