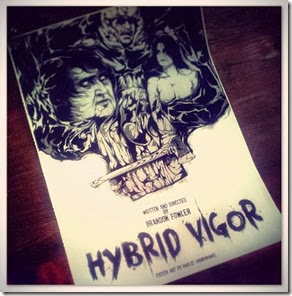 A new 2014 trailer has been released for the Latvian horror film “Hybrid Vigor”, a film I have blogged about before back in early 2013 while the film was in production. Well production is over and “Hybrid Vigor”  is edging closer to a release date. The film is directed by Brandon Fowler and stars Velta Buka, Jevgenija Mirosnicenko, Mike Altmann, and Zane Frolova.

“Hybrid Vigor” began production back in March 2013 and was 100% funded through Kickstarter. Set in Latvia, “Hybrid Vigor” is about life, death, violence, morality, immortality, love, and loss in the USSR during Soviet times, and in present day Latvia.

The film is the story of a mysterious girl found living in a remote Latvian forest who is captured by police and taken to a mental institution in Riga, Latvia. She doesn’t speak, but seems to understand everything. She doesn’t sleep, but never acts tired. Who is she and where is she from? And could she be connected to the disappearance of a little girl in the same area 20 years earlier?