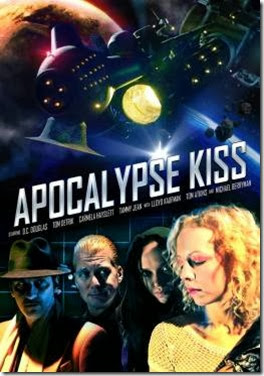 VT Events and Potent Media present APOCALYPSE KISS DVD RELEASE PARTY. Special guest bands will open the show and the event will be headlined by TRAVIA! They will perform music from the film immediately after the film.

Sunday, March 9th at the TLA Doors open at 4PM. 18+ to enter Tickets are $17.00 Through Potent Media, Travia and Double V Bookings surcharge free! Tickets available online this Wednesday, at livenation.com and tlaphilly.com

The film is futuristic science fiction thriller that follows government security agent Jerry Hipple who has been unsuccessfully tracking the city's most infamous criminal-- The Red Harvest Killer. When two nomadic lovers, Katia and Gladys enter the city the death count rises and are being credited as Red Harvest killings. Obsessive compulsive Adrian, the actual Red Harvest Killer becomes furious that the sexy serial killing duo are grabbing media attention under his alias. Not only does Adrian attempt to reclaim his rightful reputation but he also decides to cleverly aid his detective counterpart through the case. All the while, killers and victims alike are unaware the world is about to reach an abrupt catastrophic ending.