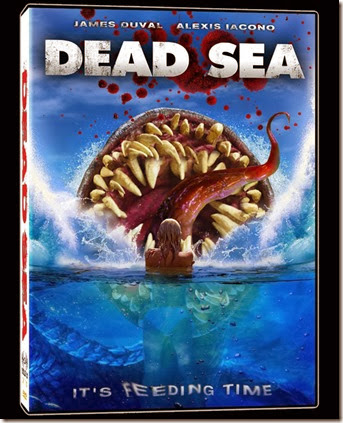 “Dead Sea” is directed by Brandon Slagle and follows a Marine Biologist who is thrust into the violent paranoia surrounding a town preparing for the return of a legendary serpentine creature.

All legends have some basis in FACT. 2002 – Afghanistan, American troops KIER THAN and CASTOR POLLUX investigate the disappearance of a squadron of SEALS over a reservoir near the Afghan border. The disappearance is attributed to a “serpent beast” which is said to re-appear every thirty years in various areas of the planet to feed. Though their initial instinct is to brush off the story and investigate further, they have a special connection to this “beast”.

Present Day, Southern California – Castor and Kier – back at home and now involved in various miscreant activities in the region – witness what to many may be an unexplained phenomena – the mass of water that the town which they call home is located on is experiencing the drastic dying off of its marine life. The state is called in and a specialist named Victoria Amissus – herself a native of the town – is called in to investigate. However, Castor and Kier know what is actually going on – they know that this great serpent has returned to their home, and now must prepare the town for their “offering”.