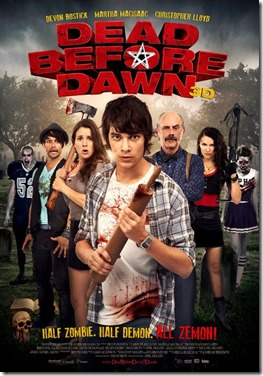 Canadian horror comedy “Dead Before Dawn” finally receives a U.S. release date. The film, that focuses on a young college student and his eclectic group of compadre’s who unwittingly bring about the Apocalypse by unleashing an ultimate evil which takes the form of a curse, resulting in half demon-half zombie creatures, hits On Demand Aug. 4th followed by a theatrical release on Sept.  6th. Watch the U.S. trailer below. "Dead Before Dawn" is directed by April Mullen and stars Devon Bostick, Christopher Lloyd, Martha MacIsaac,and Brandon Jay McLaren.

Full synopsis:
“Casper Galloway’s future is one giant question mark. With only two weeks until college graduation, he still lives with his mother, is indecisive to a fault, and is one credit away from failing. But just when Casper thinks things couldn’t get any worse, he and his friends accidentally unleash a curse that causes people to kill themselves and turn into Zombie Demons, aka Zemons.

Armed with a slew of homemade weapons and a Winnebago, the team races through the night, killing Zemons and fighting time, frantically searching for a way to reverse the curse. But as the Zemon army starts to overpower the team, Casper finds himself with no choice but to face his fears and become the unlikeliest of heroes. Will Casper be able to reverse the curse and save the world, or will he and all his friends be “Dead Before Dawn?”