My Review Of “Exorcist Chronicles” 2013 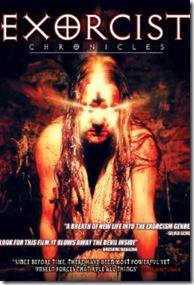 “Exorcist Chronicles” is a UK paranormal thriller directed by Philip Gardiner. The film stars Rudy Barrow, Liz Mente Bishop, Nathan Head and Bob Lee. The story was built on the premise that an epidemic of demonic possessions are increasing at an alarming rate. The story-line follows a priest charged with handling an “outbreak” of these possessions in a region of England with the assistance of an Epidemiologist. This is supposedly meant as the humanizing drive of the story, which is set against flash sequences of Vatican archival footage, of possession cases, studied. I say supposedly because on all accounts the film fails to really connect on a personal level with the audience, or show any real humanizing aspects. Which is sad because this Indie flick had all the opportunities to be a decent little exorcism movie. The Vatican’s increasing collection of documented cases, Science vs. the Spiritual and a demon that hasn't been overused in possession mythos-personally one of my favorite Mesopotamian deities – TIAMAT. It was my avatar’s name in Second Life, an experience that lasted all of three days! Somehow, though- the story and production got away from the director and creative team behind this project. Big time!

“Exorcist Chronicles” starts off flat. After a pretty nice credit roll the film just lingers on the first scene as quiet as the dead. A priest residing over someone’s bedside- I am assuming death bed because two more priests enter, only to mutter in a few short sentences,  declaring the priest Father Death. No reason is given and we are forced to just take their word for it and move on. Then just as blunt as the first scene plays out another scene begins with no real dialog or story lead to suggest why or where or anything really that would give any real depth to the situation. This seems to be the running premise throughout the film. Just a series of random scenes of characters that we are shown, with very little dialog, that actually give some understanding to their purpose within the story, or why we should even care! No arcs, no real guiding stream of consciousness that would validate the characters, or hook the story’s themes together. All of this is only broken by scenes of various demonically possessed people. In a way that almost comes off as some type of Catholic compulsory  hording fetish of the possessed. Most of these almost surrealistic moments play out in grandiose artfilm fashion, that belong more in rock music videos than in movies. And sadly these little visual artistic experiences are really the only thing that  suggests any emotional involvement from the director or writers.

There is some dialog-don’t get me wrong-the cast doesn't mime out the story. The dialog is just so short and unattached to the meat of the overall synopsis that it almost seems pointless. The characters are one dimensional and way under developed. It never goes deep or offers the details needed to prove the plot, or solidify the events that take place in the film. Mostly it is just basic banter about first person necessity or requirement –like “How long has this been happening?” or “Don’t you believe in the presence of evil”. Pray, pray, pray, blah, blah, blah. Even the exorcisms were weak and not fully visualized. I don’t know what really happened with the film but it just seemed like one big carousel of randomness, hoping we understand that -“everything is implied”. It is like we jumped in in the middle of events, and only glimpsed small portions of what was happening, only to be thrown into another moment. Actually I think this may be the first film with British actors that was disappointing. The story wasn't in-depth or thought provoking-really didn't even seem smart. Even the character’s seemed contrived and almost pointless. Not to mention that the acting was way below the standard UK talent pool-which really almost never happens, except for actors like Hugh Grant-they really fell flat. And a couple of characters where so unrealistic that it seemed ridiculous. The only real quality moments in the film came from the creative expressionism style, shown with the Vatican footage or flashes of demonically possessed characters. Set those to some Death Metal and you may just have something here.

I hate when I give bad reviews. It kind of depresses me, so much negativity. However, like I always say-Don’t let anyone’s review or opinion of a film keep you from checking it out yourself. Everyone sees and relates differently and uniquely. What was lost on me with this film may connect with you-just go into “Exorcist Chronicles” forewarned.
Posted by A Southern Horror Fan