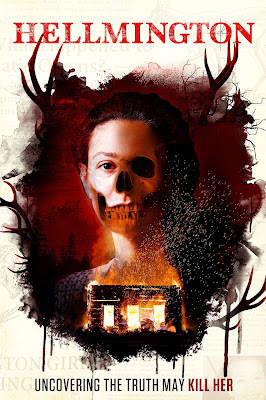 In 1999, outside the sleepy town of Hellmington, troubled high school senior Katie Owens mysteriously vanished. Nine years later, Detective Samantha Woodhouse, a former classmate of Katie's, returns to Hellmington for the first time since graduation to deal with the unexpected death of her father.

The story distorts perspective by forcing elements of near psychotica inducing moments that cause you to question the protagonist's mental state. "HELLmington's" main plot is a suspensful mystery involving a cold case that once revealed is disturbing, and relevant. It plays out like a dark web nightmare version of a ID channel episode.

At the start, the film is both confusing, distorted and emotionless. A stylistic trick that is as visually creative as it is questioning. Much like the actually story line- what happened in 1999?, Who is messing with Samantha Woodhouse?, and how much of the story is even real? I can't tell if this warping of the film's beginning is intentional artistry or accidental. I did find it intriguing.

The cast create some stoic, gothic characters reminiscent of  Fargo' or 'Twin Peaks'. There are moments when the story trips on it's own weightiness. It is a dark, slumbering plot. Still, "HELLmington" begins to show it's true depth of darkness around 50 minutes in and the suspense and chilling nature becomes elevated.

The horror never really gets there fully, but atmospherically it is creepy- in a sleepwalking down an alleyway after midnight- kinda way. There is visual elements that play on occult horror thems, much in the way 'Riverdale' did it with the Gargoyle King. The cinematography moves from unimaginative stationary shots to some truly stunning horror fueled thriller moments. Overall "HELLmington" is a nice, chilling nightmare with a twist ending. (3/5)
Posted by A Southern Horror Fan