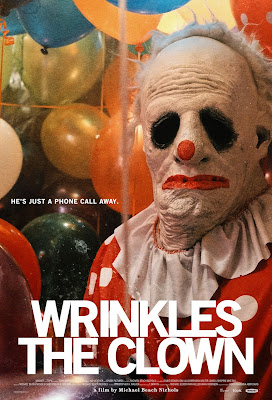 The official trailer has been released for upcoming documentary "Wrinkles The Clown". This is the latest doc film from filmmaker Michael Beach Nichols. Based on the real viral sensation of sightings of a clown and the subsequent mythic impact on social media, "Wrinkles The Clown" is set to be released October 4th. The world premiere is slated for Fantastic Fest.

The documentary looks at a creepy clown who is hired to terrify misbehaving children in Southwest Florida. Wrinkles went viral after a silent black and white surveillance video was uploaded to YouTube, depicting a child sleeping peacefully before a disheveled old man disguised as a clown slid out from beneath her bed. That led to an outpouring of similar videos and the creation of an internet sensation that rivals Pennywise in sheer, malevolently cheery creepiness.