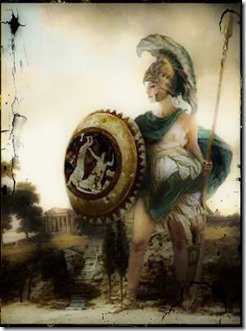 Tomorrow is the ancient Roman festival in honor of the Goddess Bellona-no not bologna-but Bellona. She was a true Wonder Woman of mythology.  Bellona was an Ancient Roman goddess of war, similar to the Ancient Greek Enyo. Bellona's attribute is a sword and she is depicted wearing a helmet and armed with a spear and a torch. The name "Bellona" derived from the Latin word for "war" (bellum), and is directly related to the modern English words "belligerent" (lit., "war-waging"), "bellicose" and "antebellum". In earlier times she was called Duellona, the name being derived from a more ancient word for "battle".

The first temple to Bellona was built in the year 296 by the consul Appius Claudius and it was erected by the Circus Flaminius, located in the southern end of the Campus Martius. Campus Martius was located outside the city walls of Rome and was dedicated to Mars, the Roman god of war, with an ancient altar and became closely linked to soldiers and the army. Events, rituals and festivals associated with underworld deities were held in the Campus Martius. The festival in honor of Bellona was celebrated on June 3. Bellona also had had several shrines in Rome and another temple was dedicated to her in Ostia Antica, the harbour city of ancient Rome. Priests of Bellona would perform furious dances using weapons and armor in honor of the goddess of war and were known to wound and gash themselves in a frightful manner.

The Romans were highly practical and believed that their gods and goddesses controlled everything in their lives and therefore every occupation and task had its presiding Roman goddess or god. Bellona the Roman goddess of war was worshipped in the same way as any other Roman divinity with prayers and making vows, dedicating altars, sacrificing blood, animals, birds and offerings of milk, honey, grain, fruit, cakes, flowers,  perfumes and wine. Black victims to the deities of the Underworld. The sex of a sacrificial animal had to correspond to the sex of the goddess to whom it was offered. The blood sacrifices made to Bellona, the goddess of war, would therefore have been a black ewe, cow or heifer, sow, hen or other female birds and conducted outside a temple. An even darker side to Bellona is revealed in relation to blood offerings as the earliest sacrifices are said to have been human.
Posted by A Southern Horror Fan