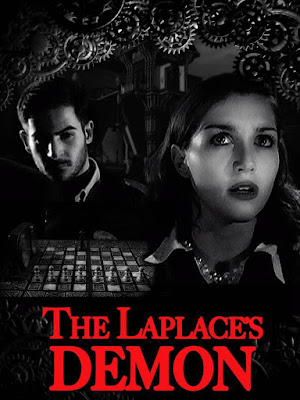 The award-winning horror thriller The Laplace’s Demon is now available on demand in the U.S. and Canada on iTunes, Amazon Prime Video, Google Play and more platforms.


The critically-acclaimed horror feature by Giordano Giulivi was a favorite of the horror festival circuit, winning multiple awards at Screamfest (including Best Score, Cinematography and Visual Effects) and screening to enthusiastic praise at the recent editions of Fantasia and FrightFest.
The official synopsis reads: “A team of fringe scientists researching a way to predict the future are trapped by a malevolent professor in a deadly test of their own experiment.”
“The Laplace’s Demon is a deadly game where the scientists literally become chess pawns at the mercy of a predatory Queen that can anticipate their every move,” says Armand Petri, Head of Operations of distributor Reel Nightmare Films. “It’s a tense slasher with both wit and style.”
Praise for The Laplace’s Demon:
“An incredibly well though-out chiller. I could not get over how much tension was packed into action sequences.” – Nightmare on Film Street
“A Hitchcock-level of suspense.” – Blumhouse
“I highly recommend it if you’re a fan of The Twilight Zone or if you’re dying to see something unusual. I promise you won’t regret it. Score: 9 out of 10.” – HorrorSociety.com
“A masterpiece in manipulation, style, nail-biting suspense and jaw-droppingly impressive story.” – HorrorFreakNews
“The Laplace’s Demon is a solid entertainment option for horror and sci-fi fans looking for an original concept and one genuinely frightening experience,” adds Petri. The 104-minute long film is now available on demand in North-America.