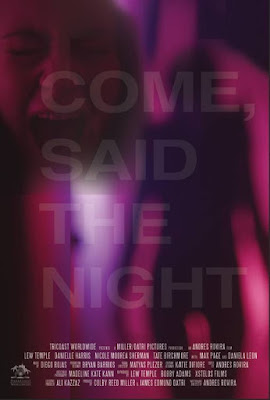 THRILLER-HORROR ‘COME, SAID THE NIGHT’ RECEIVES WORLD PREMIERE AT CINEQUEST 2019In some families, the monsters live within.


It is a methodical film that dances back and forth between the real and imagined, the concrete and the unknown, and what it is to find your own place in the world despite where one has come from,” wrote Film Threat.
From Writer-Director Andres Rovira (No Stranger Pilgrims, The Projectionist), COME, SAID THE NIGHT is billed as a coming-of-age thriller/horror story with a young female lead grappling with sexuality and repression, accompanied by a terrifying monster that could end her childhood forever. “Director Andres Rovira does a masterful job in COME, SAID THE NIGHT of crafting a tale with many unique twists and turns, such as using Greek mythology as the religious backdrop,” wrote Morbidly Beautiful.
COME, SAID THE NIGHT follows 13-year-old Sprout Grady (Nicole Moorea Sherman) and her family to their secluded “Sanctuary” in the woods, on the anniversary of her sister Magda’s (Daniela Leon) death. Her father Roy (Lew Temple) has deep-seated beliefs in ancient Greek mythology, believing in the power of mythological gods, choosing to homeschool his children, Sprout and Percy (Tate Birchmore), protecting them from “The Otherness” – the horrors he believes reside within modern humanity. Sprout, who suffers from sleep paralysis, is increasingly haunted by a lurking Gorgon monster. And when outsiders, a widowed park ranger, Stella Woodhouse (Danielle Harris), and her handsome son Max (Max Page), enter the Gradys’ lives, chaos ensues and brings a strange and terrifying turn of events that will uncover dark family secrets and rock the core of everything Sprout thought she knew.
“A slow burn psychological thriller that reminds us just how terrifying it was to grow up,” wroteduring DarkCoast’s launch of the film’s international sales at the 2018 American Film Market (AFM).
COME, SAID THE NIGHT will have its world premiere at Cinequest on Screen 17 of the Century 20 Redwood City Theaters on Saturday, March 9th at 4:15pm. The film will also show on Monday, March 11th and Wednesday, March 13th. Tickets and more information are available here.
COME, SAID THE NIGHT features notable and emerging stars, including Danielle Harris (Halloween series, Don’t Tell Mom the Babysitter’s Dead), award-winning Lew Temple (The Walking Dead, The Devil’s Rejects, The Endless), Tate Birchmore (Peppermint), Daniela Leon (Atypical), Max Page (Prime Suspect, The Young and the Restless) and Nicole Moorea Sherman (The Bacchae, Little People series).
The 2019 Cinequest Film Festival will run from Tuesday, March 5th to Sunday, March 17th.
DarkCoast is a division of TriCoast Entertainment: A new home for story-driven American films, TriCoast Entertainment is a full service media company that creates, produces, manages and distributes unique and unusual entertainment. Bringing together filmmakers, distributors, financiers, and technologists, TriCoast Entertainment embraces change by redefining the production and distribution model for indie filmmakers. Founded by: Strathford Hamilton and Marcy Levitas Hamilton.
Posted by A Southern Horror Fan